Corbett, ending months of speculation about whether the state would take advantage of billions in Medicaid dollars, will seek approval from the federal government to provide private health coverage rather than expand the state’s Medicaid rolls, say several people who were briefed on the plan.

“Next week, the governor is going to outline his vision for a Pennsylvania-specific plan to increase access to quality and affordable health care for all Pennsylvanians,” said Jennifer Branstetter, Corbett’s policy secretary, who declined to give details. “Gov. Corbett has consistently said Pennsylvania cannot afford to grow an entitlement program, and that we need to look at a number of other options – based on commonsense reforms – to increase access to affordable health care.” 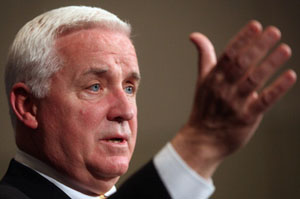 The strategy could be a deft political move, ahead of an election year, that addresses what some perceive as Corbett having lack of compassion by some while mollifying critics opposed to increasing entitlement programs.

At the same time, critics say Corbett is acting late and may find it hard getting his plan approved.

Currently, 25 states are moving forward with Medicaid expansion, which begins next year. Corbett, who initially rejected expansion in his February budget address, has said recently that he would consider options if the federal government agreed to modifications in the way Medicaid was provided.

The broad framework of Corbett’s private-sector-driven proposal is similar to plans advanced by Arkansas and Iowa, neither of which has been approved by the federal government.

Earlier from KHN: The Arkansas Medicaid Model: What You Need To Know About The ‘Private Option’

Corbett’s “Healthy PA” plan will contain additional provisions such as co-pays and work-search requirements for both new and existing Medicaid recipients. Their co-pays would be based on income that would be capped at $25 a month.

No other state has sought work-search requirements.

The plan also will include reforms for the broader health-care industry, among them expanding federal support for primary health-care centers, enhancing primary care through doctor-loan forgiveness, and addressing prescription-drug abuse through better monitoring of information.

Also Monday, Corbett will take on the divisive issue of public health coverage for children, say people familiar with his plan.

Corbett is expected to push back against the federal government’s denial of a request last week to keep children on CHIP, the state-run health program, rather than move them to Medicaid as required by the Affordable Care Act, the sources said.

The administration contends that CHIP is more cost effective in the long run and gives children and their parents more options in finding providers.

Administration officials said Medicaid expansion would begin by mid-2014 and as late as 2015.

“HHS is committed to supporting state flexibility, within the confines of the law,” said Fabien Levy, a spokesman for the Department of Health and Human Services.

Under the Affordable Care Act, the federal government covers the full cost of newly eligible Medicaid beneficiaries for the first three years and not less than 90 percent of the cost in the years thereafter. It expands coverage to individuals and families earning up to 138 percent of the federal poverty level, or up to $15,800 for an individual or $32,400 a year for a family of four.

Hospital executives and long-term-care providers, who were briefed on the plan by the governor’s staff, said it addressed the problem of uninsured Pennsylvanians and protected coverage for existing Medicaid recipients.

“Gov. Corbett has spent a lot of time analyzing the issue and finding a thoughtful solution that is right for Pennsylvania,” said Stuart H. Shapiro, chief executive of the Pennsylvania Health Care Association, a Harrisburg trade group for nursing-home operators, who are worried about Medicaid expansion’s pulling money away from seniors.

Advocates for low-income residents say they are concerned about the delay and fear the premiums will put insurance out of reach for some people.

“What’s bad about it is that under the guise of reaching out to cover people with health insurance, they are going to take benefits away from an awful lot of people,” said Richard Weishaupt, senior attorney at Community Legal Services of Philadelphia. “Welfare provides a mom and a kid $316 a month, and they get Medicaid. How in the world are they going to come up with $25 for health insurance?”