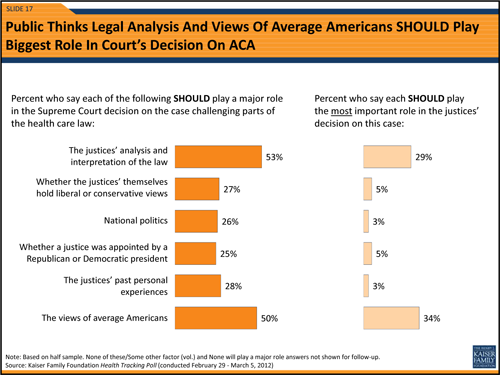 Half the country hopes the Supreme Court will throw out the health law’s mandate that Americans carry health insurance, according to a new poll released Wednesday. In what may be a sign of political wish fulfillment, half of Americans expect that the court will take that course when it takes up the case later this month. Only 33 percent of people expect the court will uphold the individual mandate, which has long been one of the least popular provisions of the Affordable Care Act.

The poll from the Kaiser Family Foundation shows that the public’s views on the court case are deeply colored by their own ideological and political perspective. (KHN is an editorially independent program of the foundation.) Among those with a favorable view of the law — primarily Democrats and Democratic-leaning independents — only 26 percent think the court should rule the health insurance mandate is unconstitutional, while 50 percent think it should be kept. Among those who oppose the law– primarily Republicans and Republican-leaning independents — only 7 percent think the mandate should be upheld, while 83 percent believe it should be struck down.

The poll indicated that these strong opinions weren’t grounded in a great deal of knowledge. Fewer than four in 10 people say they are closely following the court case, and only 58 percent are confident that the health care law is in fact still on the books and a real law. Yet 86 percent were willing to proffer an opinion on how they expect the court to rule on the case.

Which ever way the court rules, it doesn’t appear that it’s going to change people’s views of the law. Only a sliver of people who oppose the law say they will view the law more positively if the court upholds the law, and only a sliver of supporters say a repudiation by the court will dampen their views.

Interestingly, many actually want the third branch of government to be less independent of the vox populi in this matter. Thirty-four percent think the “views of average Americans” should play the most important part in the justices’ decisions. Only 29 percent think legal judgment should be the deciding factor.

Adhering to public will — besides being the opposite of what civics classes teach students that the judicial branch is supposed to do — would not an easy instruction to follow in this case. Both the Kaiser poll and a new poll from the Pew Research Center for People & the Press find that two years after the law’s passage, the public remains evenly divided about whether they like it.

The Pew poll also found the individual mandate to be unpopular, although pollsters there noticed that the public’s view was malleable based on how the mandate was described to them. According to Pew:

The survey question mentioned both the financial penalty to be assessed for failure to purchase insurance and the financial assistance the government will provide to those who cannot afford a policy. But levels of approval of the provision were highly sensitive to which aspect of the law was mentioned last.

Among those for whom the question ended with the reference to financial help, opinion is evenly divided (47% approve of the mandate vs. 49% who disapprove). But among those who heard about the penalty last, most disapprove of the provision (63% disapprove vs. 34% approve).