From leading evacuees through flooded streets to carrying a family pet out of a collapsing home, first responders have been dubbed the heroes of Hurricane Sandy. But not all of them had health benefits as they headed into the disaster zones this week. 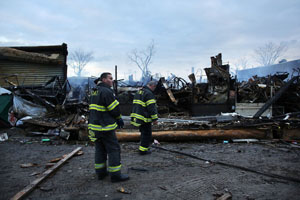 Firefighters stand among the remains of buildings consumed by fire in Queens, N.Y., during Hurricane Sandy (Photo by Spencer Platt/Getty Images).

While local, full-time police, firefighters and EMTs have full coverage, first responders also come from the Reservist Program, the Federal Emergency Management Agency’s network of trained disaster relief workers who serve on an on-call basis. Part-time workers make up about 70 percent of FEMA’s workforce, of which 2,300 total employees have been involved with hurricane relief efforts.

Reservists are paid a flat rate of between $11.29 and $42.03 per hour when they are in travel, on duty or training – usually about 30 days at a time. The jobs do not include health insurance, annual leave or retirement benefits since they are meant to be temporary. According to a FEMA document, reservists who are sick or injured “while in the performance of duty” may be eligible for benefits under the Federal Employees’ Compensation Act.

Dena Patrick, founder of a social charitable website, Wishadoo, started a Change.org petition on Monday to argue for FEMA reservists to get health benefits. “I feel that our priorities are skewed,” said Patrick.

Patrick said she was motivated to act by her friend, a reservist, who she said works 300 days a year and is not insured. When Hurricane Sandy hit, Patrick realized that other first responders were not covered unless they had a separate insurance plan. As of Saturday morning the petition had more than 4,900 signatures.

For some first responders, health benefits are not an issue. Mark Bosma, spokesperson for Vermont’s emergency management department, said the majority of on-call disaster workers in his state work full-time for the government and are covered by their permanent jobs. If disaster strikes they are usually working in their usual specialty – be it transportation or road assistance.

This isn’t the first time federal support for first responders has been scrutinized.  John Lauer, a seasonal firefighter with the U.S. Forest Service, received 126,000 signatures on his online petition for firefighter health coverage during the wildfires that raged in Colorado earlier this year. Like the FEMA reservist cadres, seasonal firefighters work only part of the year and didn’t receive year-round benefits.  On July 10, President Obama called on federal agencies to provide coverage for the firefighters.

This year also ended part of a decade-long battle over extended health care coverage for 9/11 emergency service workers. The National Institute for Occupational Health and Safety announced that 50 types of cancer would be covered under the health care program to support who had been exposed to the environmental hazards at Ground Zero.

Patrick is optimistic that her voice will also be heard on behalf of the reservists.

“Any time it’s been brought to the public’s attention that first responders aren’t treated adequately, it’s been my experience that everyone is absolutely supportive,” she said.

Patrick was not aware of how many FEMA reservists do not have health insurance. FEMA did not immediately return calls for comment.

Sarah Kliff of The Washington Post’s Wonkblog reported Saturday that Congress has looked at the issue in the past. In 2009, Rep. Jim Oberstar (D-Minn.) introduced legislation to allow disaster assistance employees to be eligible for the Federal Employees Health Benefits Program. At that time, Oberstar’s office found FEMA had 9,106 disaster assistance employees with only 770 qualified for FEHB. He also found that most of the remaining disaster employees did not qualify for other employer-sponsored insurance, Kliff reported.