NORTHRIDGE, Calif. — Jill Freedman felt like her heart was jumping out of her chest. She knew her blood pressure was too high and feared having a heart attack or a stroke.

“I was freaking out,” said Freedman, 55. “You get very emotional when you think you could drop dead at any moment.”

Her doctor doubled one of her medications, she said, but that only made her feel worse. So Freedman turned to the one person she knew she could count on — her pharmacist.

“It was Diana who figured out what the problem was,” said Freedman, referring to her longtime pharmacist Diana Arouchanova. “Had she not been on top of what I’m going through, God knows how many more weeks this could have potentially gone on.”

Arouchanova, who owns Clinicare Pharmacy, reviewed Freedman’s medications and realized that her problem stemmed from the dangerous combination of two prescriptions. She got the physician to change the medications and started checking Freedman’s blood pressure daily. Soon, it began to drop.

Once limited to filling and dispensing drugs, pharmacists are increasingly providing direct care to patients. Across the country, they are working with doctors to give immunizations and help patients safely manage medications. In some places, they can even write prescriptions after a physician’s diagnosis. 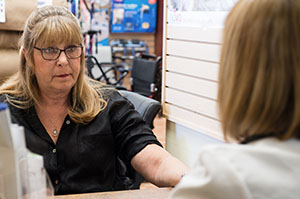 California is among the states to give pharmacists the greatest flexibility, thanks in part to a law that took effect this year. Other states, including New Mexico and North Carolina, have also allowed pharmacists to take on more clinical responsibilities.

It’s all part of a push by druggists and pharmacies to take a greater role in guiding patients and promoting good health. One prominent example is CVS Caremark’s recent announcement that it will stop selling tobacco products to help customers become healthier.

At the same time, health officials are looking for ways to ease the strain on overloaded doctors, improve care and contain costs. With millions of people gaining coverage under the nation’s health law, experts say pharmacists can fill gaps in primary care and help avoid unnecessary hospital admissions.

Pharmacists, who are required to have a doctorate in pharmacy, say technicians can fill prescriptions and that their training and education can be put to better use.

“We are the most overeducated and underutilized healthcare professional in the U.S.,” said R. Pete Vanderveen, dean of the USC School of Pharmacy. “It doesn’t take eight years of education and a professional doctorate to fill a bottle with pills.”

The new California law designates pharmacists as health care providers and allows them to give routine vaccinations and provide some travel and birth-control medications. The law also creates a new class of provider known as an “advanced practice pharmacist.” With additional training and experience, such as a residency program, advanced practice pharmacists will be able to collaborate with doctors in assessing and referring patients, starting and stopping medications and managing patients’ diseases.

Some physicians, however, are wary of pharmacists doing too much on their own. The American Medical Association supports physician-led teams that include pharmacists, but opposes giving pharmacists prescription privileges without a doctor’s supervision. The California Medical Association initially opposed the state law but withdrew the opposition after amendments were added, including one that limited the type of medications they could provide.

Pharmacist organizations are quick to point out they don’t want to take over the physician’s job.

“We are not looking to become the primary care provider for all patients,” said Stacie Maass, a senior vice president at the American Pharmacists Association. “We want to be part of the team.” 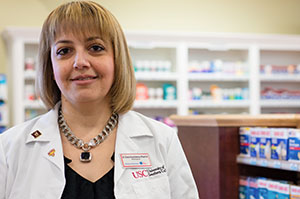 Research has shown that pairing pharmacists and physicians can save money and improve health outcomes. Other studies are under way.

Clinical pharmacist Michelle Lee is funded by a federal grant to the USC School of Pharmacy and AltaMed Health Services to determine whether pharmacists can help high-risk patients control chronic diseases take their medications as prescribed and avoid hospitalization.

On a recent day at an AltaMed clinic in Boyle Heights, Calif., Lee stopped the medications of a liver disease patient whose condition might have worsened if he took what a local hospital just prescribed him. Then she ordered another check of his liver.

Lee also saw 57-year-old Maria Flores, who has uncontrolled diabetes, noticing that both her blood sugar and her blood pressure were higher than normal.

“Have you been under any stress?” Lee asked through a Spanish-language translator.

The woman started to tear up. She responded that there had been a death in the family and that she hadn’t been able to sleep or eat. Lee ordered a shot of insulin and adjusted her blood-pressure medication. She reminded Flores to check her blood sugar every day.

“It’s important for us to know if the insulin is at a good dose,” she said. “We might need to make adjustments.”

As a student, Lee worked at Walgreens and customers frequently came in with questions. Lee said she wanted to do more for them. Now, Lee said she believes she is doing that.

“It’s a little role but I think it’s making a big difference,” she said.

Freedman appreciates the difference. She discovered Clinicare Pharmacy about seven years ago. In contrast to the chain drug store she’d been using, which she felt was impersonal, Arouchanova and her staff regularly called to see how she was feeling and to check on any side effects.

Now Arouchanova, 36, helps her track the more than a dozen medications she takes for hypertension, Crohn’s disease and ulcerative colitis. 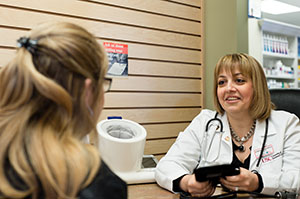 Freedman stops by a couple times a week, sometimes just to say hello. She considers her pharmacist a friend and brings her birthday presents. “I can walk in here any time of the day,” she said. “There is somebody who greets me with a smile.”

Arouchanova, an Armenian immigrant with a bob of short blond hair, said she tries to go “above and beyond the call of duty.”

“I take care of each of my patients as if they were my only patients,” she said. That means working up to 12 hours a day and only seeing her young son briefly in the morning and evening.

One day a week, a physician, Hanriet Minasian, works out of an office in the pharmacy. She and Minasian have an agreement that allows Arouchanova to order labs and to start, stop and adjust medications. They refer patients to one another and together review their patients’ charts.

Erika Pappas, 34, who lives in nearby Reseda, sees both Arouchanova and Minasian for her diabetes and hypertension.

“I don’t have to worry about my pharmacist or my doctor not being on the same page,” she said during a recent visit. “Everything is very clear.”

Minasian said Arouchanova is another set of eyes on complex cases — patients with multiple chronic diseases who receive numerous prescriptions.

“It’s like a checks and balances system,” Minasian said. “The more heads you put together, the better care we can provide for our patients.”