Seated in a circle, with matching five-month pregnant bellies, a group of women read aloud from crumpled pieces of paper.

“When I think about how I was raised, I feel like I need to give my child a better life,” one woman said.

“When I think about how I was raised, I feel prepared,” another said. 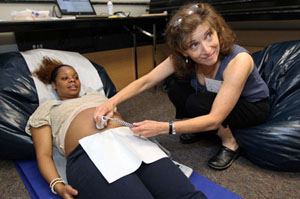 A heartfelt discussion about the impact that parents have on their children followed. But this is not a simple support group. It is an innovative way of delivering prenatal care that takes women out of the doctor’s office and into a group setting where education, emotional support, and physical health intertwine.

Philadelphia had one of the worst first-day infant mortality rates — 5.43 of every 1,000 live births — among more than 200 of the most populous counties in the country between 2007 and 2009, according to a recent report by the charity Save the Children.

North Philadelphia has the worst statistics in the city, and the women in the bland classroom at Einstein Medical Center were all high-risk because of medical conditions or previous problem pregnancies.

Maternal health workers at Einstein hope that by shaking up the prenatal care model they can bring down those dismal statistics.

The hospital won a federal grant — $240,000 in this first year — to implement and test what is known as the Centering model for prenatal care. Centering is a program that groups pregnant women based on their due date. All of the women in the room are due in November. Centering combines regular prenatal check ups with education and peer support, and the monthly sessions run for two hours.

The grant comes from the Strong Start for Mothers and Newborns initiative, part of the Affordable Care Act. Like many aspects of “Obamacare,” the four-year program is trying to innovate health care, reduce costs, and improve outcomes.

Strong Start aims to lower preterm birth rates and the costs of medical care throughout pregnancy, delivery, and the first year of life.

And though the program does not reduce costs for prenatal visits – the provider sees 8 to 10 women for two hours, about the number she would see individually in that time — the hope is the extended time and group support will impact outcomes.

If women are able to have healthy deliveries and avoid complications, they will also avoid expensive hospital stays for themselves and their babies. The new program will eventually measure preterm births, admissions to the Neonatal Intensive Care Unit, and length of time in the NICU.

The program focuses on preterm birth because complications from those deliveries are responsible for a large percentage of infant deaths.

“They’re getting more education than they could with a four-minute consultation with their provider,” said Anne Rosenberg, the nurse practitioner who runs the group. “They get a lot more education, we talk about nutrition, and people will share. … It increases their awareness.”

When the women entered the room last Monday, they took their own blood pressure and weight, and snacked on yogurt, fruit, and granola bars. One by one, they reclined on a pile of yoga mats behind a curtain while Rosenberg checked fetal heartbeats.

The women traded tips on their favorite pregnancy smartphone apps, and Rasheeda Bagwell-Kale, a 32-year-old mother of two, offered advice to some of the first-timers. For her earlier pregnancies, she went to the provider’s office for prenatal care, she said, but she prefers Centering.

“You get to hear others’ stories and share,” she said. “It’s more personal.”

Khaisha Brodie, 26, who miscarried during her first pregnancy, said she felt more comfortable in the group. “I’ve been to doctor’s appointments where I have a thousand questions, and the doctor is looking at his watch the whole time,” she said.

“It makes me not want to ask questions next time.”

Research trials have shown group prenatal care increases knowledge about pregnancy and decreases preterm birth rates. A 2012 study in the American Journal of Obstetrics and Gynecology found a 47 percent reduction in preterm births for women in a Centering program compared to women in traditional maternity care.

The conversation in the class often stayed light and amicable, but medical advice was injected into the chatter. Women worried about the impact of breast-feeding on their physique, but also learned proper technique and positions for their baby.

“It sounds very kumbaya-ish,” said Rosenberg, who admitted she was skeptical when she was chosen to run the program. But now, she said, she “drank the Kool-Aid … I think it’s great, obviously.”

By Allyn Gaestel, For The Philadelphia Inquirer August 6, 2013