Pennsylvania’s ambitious alternative to expanding Medicaid — a private-market initiative that Gov. Tom Corbett says is designed to save money — would require 723 new state workers, about one percent of the current workforce. 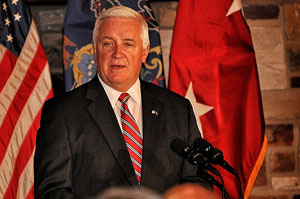 The projected number of hires, detailed by state officials, is far higher than most states have needed and surprised some public-policy experts.

Many states are adding employees to review applications and confirm eligibility, and to implement all the changes required by federal law. Those new hires typically are in the dozens. New Jersey, for example, said the contractor that coordinates its health benefits hired 38 permanent employees and 62 temps.

“The enrollment system is heavily automated for Medicaid,” said Sara Rosenbaum, a professor of health law and policy at George Washington University. “This is not being done by ladies with shoe boxes and pieces of paper.”

The governor’s initiative led to often-contentious negotiations with the Obama administration. State officials nevertheless moved forward last week with requests for submissions from insurers, saying they were optimistic it would be approved.

The proposal to use federal Medicaid dollars to buy commercial coverage, rather than expanding the current program, has been criticized as unnecessarily costly. It includes several provisions, such as financial incentives for healthy behavior and for seeking work, that opponents deride as bureaucratic.

Corbett says the incentives, along with sweeping changes that include benefits cuts for some current and future participants, are necessary to make the program sustainable.

But Public Welfare Secretary Beverly Mackereth said none of that factored into calculations that her department would need 716 new staff positions and seven temporaries. Most would be caseworkers in more than 80 offices around the state, where 4,057 are employed now.

Tracking healthy behavior and work-search progress would be automated and based on “random checks,” Mackereth said.

Indeed, “the private coverage option is potentially less burdensome on our caseworkers than Medicaid expansion,” department spokeswoman Kait Gillis said in an e-mail.

The projected number of hires, they said, was based on a formula. It considered current caseloads, with 2.2 million Medicaid recipients, and estimates of how many would be newly eligible. The state estimated 605,000, which includes people who might switch from employer-provided or other insurance. That is significantly higher than the more common estimate of 500,000  .

Mackereth said the new employees would cost the state $30.5 million in the first fiscal year, much of it matched by the federal government. Even with budget and payment cycles that push the bulk of the cost reductions into the following year, that expense would be more than covered by “the $125 million that we believe we will have from the savings from doing Healthy Pennsylvania,” Mackereth said, referring to the governor’s overall initiative.

Officials said the projected cost was included in the governor’s budget request for the fiscal year that begins July 1. Although no one could be hired until then, Gillis said, the state was “actively recruiting staff” in hopes training could begin over the summer.

If approved by Washington, the new insurance program would begin in January, one year later than in most of the 27 states expanding Medicaid.

In responses to inquiries about staffing needs from 17 of those states, only one – California, which has enrolled 1.9 million Medicaid recipients since Oct. 1 – reported hiring about 100 workers. Counties handle enrollment there, and they hired about 2,500.

Michigan, which predicts enrollment about half to three-quarters of Pennsylvania’s and which won federal approval for similar incentives for healthy behavior, added 10 temporary workers to launch its expansion and is hiring 30 full-time employees, a spokeswoman said.

Maryland did not hire anybody extra, said Secretary of Health Joshua M. Sharfstein, adding that his experience meant nothing about Pennsylvania.

Although federal law dating to 1965 sets a common framework for Medicaid, states have vastly different programs, benefits, and eligibilities; Delaware, for example, implemented most of the “Obamacare”-type expansion in 1996. Administrative structures are especially varied.

Benjamin Sommers, a health economist at Harvard and former adviser to the federal government on the Affordable Care Act, led a team that interviewed top Medicaid officials in most expansion states last year. They did not hear “a lot of evidence to suggest that states were adding huge numbers of employees,” he said.

After being told of Mackereth’s formula, however, Sommers looked up some numbers.

“Given that Pennsylvania is expecting to increase its Medicaid enrollment by about 25 percent compared to pre-ACA totals, adding 700 or so workers to a staff of 4,000 doesn’t sound outrageous,” he wrote in an e-mail. “But it’s tough to know exactly what is a reasonable number compared to other places, since Medicaid differs so widely across states.”

Perhaps other states’ fewer hires was the result of “wishful thinking,” said Eileen Griffin, a researcher at the University of Southern Maine’s Edmund S. Muskie School of Public Service. “But, of course,” she added, “we haven’t heard that the volume has broken the bank.”

Pennsylvania’s benefits programs are more centralized than most states’. Caseworkers who handle Medicaid are also responsible for food stamps, cash assistance, employment training, heating help, and programs for the homeless – each with its own eligibility criteria.

“It’s an incredibly complicated job,” said Estelle Richman, secretary of public welfare under Gov. Ed Rendell. She said the County Assistance Offices were understaffed when she left in 2009 but still termed the notion of adding 700 more employees “mind-boggling.”

Having the same workers determine eligibility for various benefits would seem efficient. Mackereth noted it also should allow them to enroll recipients in other programs they may not realize they are eligible for.

But she also said her department was undergoing a broad review of how it operates and seeking efficiencies from other states.

Meanwhile, the projected workforce expansion – about one percent of the state’s 73,800 employees – would need to be based on the current setup.

“Once we get our efficiencies, hopefully that will change,” Mackereth said. “But if we don’t do it right at first, we’re in trouble.”

By Don Sapatkin, Philadelphia Inquirer May 15, 2014