The Physician Payments Sunshine Act, an Affordable Care Act provision requiring doctors and medical companies to disclose their financial relationships, went into effect Aug. 1. Physicians say they are now working to find a balance between necessary transparency and what some perceive to be burdensome filing. 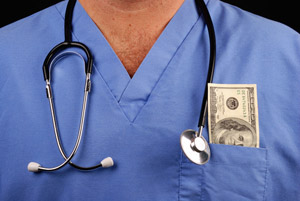 “We want to spend our time seeing patients, not doing paperwork,” said Dr. Jason Mitchell the director of the Center for Health IT at the American Academy for Family Physicians.

The Sunshine Act requires drug companies and medical device makers to report payments, gifts and investments to Centers for Medicare and Medicaid Services. Though the act is now in effect, a complete set of records are not due until March 2014 and will not be made public until September 2014.

Consumer advocates and other stakeholders favor openness when it comes to the large amounts of money medical and pharmaceutical companies spend to influence a doctor’s choices, according to a Pew Health Center statement from 2012. Holding both parties accountable with a clear reporting system would allow consumers to spot potential bias.

Mitchell, who is also a practicing family physician in Missouri, does not anticipate many immediate changes for doctors – aside from fewer lunches with pharmaceutical representatives.

He predicts that because of the increased attention placed on these small meetings that make up a majority of the reportable interactions, doctors will likely shy away from them – which could be problematic. If doctors minimize their working relationships with pharmaceutical and medical representatives, their knowledge could be “less of a resource,” Mitchell said. It’s important for doctors to keep up with drug and product information in other ways, he added.

In an effort to simplify the reporting of these payments, a number of iPad and iPhone Apps have been developed. Doctors and industry professionals can enter data by hand or scan documents which are filed into easy lists and spreadsheets.

The Centers for Medicare and Medicaid Services created different Apps designed specifically for doctors and others for medical companies, both of which have to remain accountable for these transactions.

Though it’s up to the companies to do the reporting, doctors are encouraged to keep their information up to date and to follow up on what transactions are being reported.

“There’s no reason to believe it will be erroneously reported,” Mitchell said. “We don’t have anything to hide. We certainly are very conscious of conflicts of interest.”

“Transparency is a good thing,” Mitchell said. “But we certainly don’t want an increased burden.”