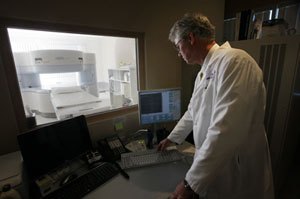 A new law will require doctors to give patients alternatives to in-house imaging. But physician John Finkenberg says the tests done by the MRI machine in his office are too important to outsource. (Robert Alan Benson)

For years, John Finkenberg, an orthopedic surgeon in San Diego, sent patients who needed MRIs to outside imaging centers. But last year, he and his five partners bought their own million-dollar machine and now, he says, the doctors can work more closely with the technicians and give their patients immediate results.

The group’s decision to install its own machine puts it squarely in the middle of a controversy over whether doctors should be allowed to order advanced diagnostic imaging tests – MRIs, CT or PET scans – for Medicare and Medicaid patients in their offices.

Critics, including Jean Mitchell, a health economist at Georgetown University, say such self-referrals fatten physician profits – leading to excess tests and higher Medicare spending – and should be banned. Supporters, such as Finkenberg, say the tests are too important to outsource. He insists his practice isn’t ordering more tests now, and says the MRI “is the perfect diagnostic tool for us. We can’t afford to miss a diagnosis for our patient and for our malpractice costs.”

Now Congress has tiptoed into the argument. Under the new health care overhaul law, doctors who refer Medicare and Medicaid patients to in-house imaging machines must disclose in writing that they own the equipment. They’ll also have to tell their patients they can get the services elsewhere, and provide a list of 10 alternative sites within 25 miles. The rule takes effect next year.

An increase in spending, then a drop

Adrienne Dresevic, a lawyer with the Health Law Partners firm, based in New York City and Southfield, Mich., says the new disclosure requirement underscores concerns among some lawmakers about physicians who refer patients to in-house imaging machines. “This is just the beginning” of efforts to tighten self-referral rules.

Medicare spending on imaging services paid to doctors rose sharply in the past 10 years – to $13.7 billion in 2006 from $6.6 billion in 2000, according to the Centers for Medicare and Medicaid Services. Spending declined to $12.1 billion in 2009, after Congress cut reimbursement rates. But the number of advanced imaging tests has continued to increase, albeit at a slower rate, according to agency data. The agency does not break out data for imaging services provided under the in-office exemption.

Since the early ’90s, doctors have generally been barred by federal law from referring patients for certain services -including imaging and lab tests – to entities in which they have a financial interest. But that law exempts doctors who provide such services in their offices. Lawmakers figured it would be more convenient for patients if the doctors could get an in-house X-ray to make a diagnosis.

Over the past several years, cardiologists, orthopedic surgeons, urologists and other specialists have used the exception to buy increasingly high-tech and expensive imaging equipment for their offices.

Some doctors have leased time on machines at existing imaging centers, arguing that the centers were part of their office practices and thus exempt from the self-referral law, according to the Medicare Payment Advisory Commission, which advises Congress on Medicare issues. This trend has infuriated radiologists, who are expert at reading images and find themselves competing with other specialists who are opting to move or keep their tests in-house.

Bibb Allen, a Birmingham, Ala, radiologist and chairman of the American College of Radiology’s commission on economics, says when doctors have imaging equipment in their offices, it “increases the likelihood that inappropriate scans might be done because of the economic benefit to the physician.”

Jamie Court, president of Consumer Watchdog, a national consumer advocacy group based in Santa Monica, Calif., said the new disclosure requirement may eventually lead patients to think hard about the financial relationship their doctor has. But in the short term, he said, the law will have little impact. “People will still defer to the white coat.”

Mitchell the Georgetown professor, says the new disclosure requirement won’t deter doctors from making referrals or prompt patients to go elsewhere for imaging services. For one thing, she says, patients can’t easily find out the costs of such services, and in any case, most Medicare patients aren’t price-sensitive because they have other insurance that picks up costs Medicare doesn’t cover. Also, she says, most seniors tend to follow their doctors’ advice.

“I trust my doctor to treat me right,” says Lollie Primous, 83, of Palm Beach Gardens, Fla. “Whatever he tells me to do, I do.”