A poll released Tuesday found that an overwhelming majority of doctors support palliative care, with 96 percent responding that they believe enhancing the quality of life for seriously ill patients is more important than extending life as long as possible. Despite these sentiments, many physicians responded that they have some hesitations about palliative care and that there are barriers to its full adoption. 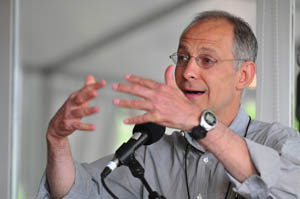 Speaking at a National Journal event Tuesday, oncologist and bioethicist Ezekiel Emanuel, who currently teaches at the University of Pennsylvania, called upon the medical community to push for even greater incorporation of palliative care into the health system.  Emanuel, the brother of Chicago Mayor Rahm Emanuel, said that his own career illustrates the major transformation in end-of-life care training. In 1984, during his third year of medical school, he decided to switch gears to pursue a PhD on end-of-life care issues, noting that his adviser told him, “That’s a career ender. Nobody wants to talk about end-of-life care.” Despite such initial discouragement, he went on to incorporate palliative care in oncology treatment at the Dana-Farber Cancer Institute and later served as the founding chair of the Department of Bioethics at the NIH Clinical Center until last August and as a special health policy adviser at the White House, where he raised attention about ethical issues in end-of-life care.

Emanuel emphasized that the greatest challenge may be simply preparing physicians to talk about end-of-life care with their patients, noting that it can be an intensely emotional and difficult conversation. Meanwhile, the poll found that 91 percent of physicians believe patients are not adequately informed about palliative care; other physician concerns include that patients are reluctant to accept it because it means they might not recover, health insurance companies and Medicare don’t reimburse adequately for consultations, there aren’t enough palliative care physicians and services and patients can’t afford the care.

The poll found that 79 percent of physicians think the health care system spends too much trying to extend life while 21 percent believes the system should do whatever it takes. Many physicians also reported that they received little training on operational and financial aspects of palliative care and that they would like more on those topics.

Shannon Brownlee, the New American Foundation’s acting health policy director, expressed concerns that the current reimbursement system inhibits the full use of palliative care, which would lead to the reduction of expensive treatment. “This is the horrible dilemma that hospitals find themselves in,” Brownlee said. “When you reduce that volume, you’re punished.”

Emanuel said that at some point insurers and Medicare will have to “make a leap together” to better support paying for palliative care. Emanuel, recalling Republican charges that the 2010 health law would establish “death panels,” noted that such political tactics “completely backfired.” Instead, he said they reinvigorated physicians’ efforts to improve end-of-life care.

“My inbox was flooded with support from physicians and it renewed the recognition by physicians that we have to do something on this,” Emanuel said.

The poll, conducted by FTI Consulting, surveyed 500 board-certified physicians, 45 percent of whom were primary care providers and 55 percent specialists between Oct. 28-Nov. 2.  The poll has a margin of error of plus or minus 4 points.