When Barack Obama ran for president in 2008, he insisted the nation could fix its health care system without requiring everyone to carry insurance. As the Supreme Court weighs in on the health law, Obama is facing the possibility that he may have to make good on his campaign claim. During the March 27 oral arguments at the Supreme Court, conservative justices – who are in the majority – aggressively challenged the mandate. 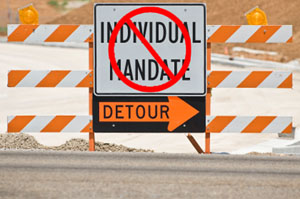 Experts consider the requirement to hold insurance, known as the individual mandate, to be the most legally vulnerable part of the law.

The administration argues that the law’s main goal of providing health coverage to 30 million additional Americans could not be achieved without the mandate because too many healthy people would refuse to obtain insurance, leaving primarily sick people in the insurance pools and driving up premium costs. Obama came around to this viewpoint after he was elected.

There are ways that Obama—if he’s re-elected — might be able to salvage the law even if the court strikes down the individual mandate but leaves the rest intact, health policy experts say.

These fixes would create financial incentives for people to not delay enrolling in insurance.

One such approach would be similar to what happens in Medicare’s Part B program, where people who wait too long to sign up for physician coverage must pay higher premiums.

But those changes would need congressional support, which is unlikely unless Democrats gain control of the House and a filabuster-proof majority in the Senate. At a recent forum on the court and the law, Chris Jennings, a Democratic health consultant, said that the law “may be virtually impossible” to fix because of the political environment, which Sheila Burke, a former top adviser to Senate Republicans, called “poisoned.”

Absent federal legislation, experts say the Obama administration would need to forge a close alliance with insurance companies if it wants to prevent the overhaul from falling apart. Insurers have reason to cooperate, too, even though Democrats vilified them during the 2009 debate over the law, said Len Nichols, director of the Center of Health Policy Research and Ethics at George Mason University in Fairfax, Va. That’s because the court might leave intact parts of the law requiring insurers to cover all applicants and not charge those with medical problems much higher rates – a financial nightmare for insurers. The administration has asked the court to strike those provisions if it invalidates the mandate.

“Insurers need this to work, which is why I always said if we can get through this election, they’re going to be our best friends,” Nichols said.

Joseph Antos, a health care expert at the American Enterprise Institute, a conservative think tank in Washington, called an alliance between insurers and the administration “the most likely scenario” if the court rejects the mandate. He predicted the administration and insurers would push hard to enroll as many people as possible, using salesmanship rather than compulsion. “I can see a second term Obama administration bringing in insurers early on, saying ‘Ladies and gentlemen, this is still your job,’ ” said Antos, who nonetheless doubts the law will succeed regardless of what the court decides.

Antos said the administration could also run public service announcements, talking about the new opportunities for people with lower incomes to get federal financial assistance to buy insurance. “What they will hear in the PSAs is there’s insurance available, you should sign up for it, protect yourself, protect your family,” Antos said.

Even without Congress, the states that have been enthusiastically gearing up to implement the law might create their own mandates, similar to what Massachusetts established. Eleven states—including California, New York, Connecticut and New Mexico—have asked the justices to uphold the law. Overcoming political hurdles in statehouses might be easier than in Washington, as insurers are often formidable lobbies in the states.

The consternation over the individual mandate stems from the fact that it is intertwined with all the other parts of the health law. Under the law, most employers will be required to offer coverage to their employers. Very low-income people who aren’t covered in their workplace would be covered through Medicaid, the joint federal-state health program to the poor. (The Medicaid portion of the law is also being challenged before the court.)

Everyone else would be required to buy policies directly from an insurer, and the federal government would help subsidize the premium cost for people making up to four times the federal poverty level, which would be $92,200 for a family of four under the current guidelines. Insurers would have to take all comers, regardless of their health status, and would be limited in how much more they could charge the very sick.

But keeping the premiums affordable—for both individuals and the government—hinges on making sure healthy people enroll in insurance too, contributing premiums that are above what they consume in health care. Hence the argument for a mandate.

“If you talk to insurance companies, they will tell you the hardest thing they do is encourage young, healthy people to buy coverage,” said Alissa Fox, a senior vice president at the BlueCross BlueShield Association. “If the mandate’s not there, you need to go back to the drawing board.”

Experts don’t agree on how badly the law would be hobbled without the mandate to buy insurance. Some economists have estimated that the number of people getting insurance would be reduced by fewer than 8 million people. That’s because the law allows people to ignore the mandate if they pay a penalty – just $95 in the first year – or don’t earn enough to pay for insurance. Other economists have predicted that without the mandate, as many as 24 million people will go without coverage—two-thirds of the number the law aimed to help cover.

There’s also wide disagreement over how much the absence of healthy people in the insurance pools would drive up premiums in the new insurance exchanges created for small businesses and individuals who don’t get coverage from their employers. Predictions range from premium increases of 9.3 to 27 percent beyond what it would cost with the mandate, according to a recent report by the RAND Corp.

For now, many advocates of the law say they’re not worried. “Most of us who supported the individual responsibility provisions feel the court is going to sustain it,” said Ron Pollack, executive director of Families USA, a nonprofit group in Washington. “There’s no urgent need to define an alternative course at this point.”

If Mandate Is Overturned, Obama Could Need Help To Salvage The Health Law