When Stephanie Wittels Wachs found out that health insurance in Texas didn’t cover hearing aids for kids, she lobbied to change Texas law. And she won. But the process took more than two years.

It was a grind, but along the way, Wittels Wachs found surprising allies. The bill’s sponsor in the state Senate was Lois Kolkhorst, a deep-red Republican with family members who are deaf.

“You end up getting into bed with people who, you’re like, ‘They’re the worst!’ But you find out they’re not the worst,” Wittels Wachs said. 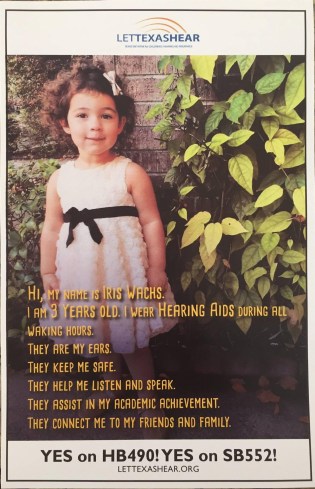 Season 3’s Episode 1 of “An Arm And A Leg” unveils the moment when Sen. Kolkhorst made an emotional pitch to her fellow lawmakers. It worked. Texas now requires health plans to cover medically necessary hearing aids and cochlear implants for children.

Wittels Wachs has a daughter born hearing-impaired, and she was shocked to learn that the hearing aids her daughter needed would cost $6,000, and not be covered by her health insurance.

But her activism didn’t come from financial need; it came after a personal tragedy. Wittels Wachs’ brother, Harris Wittels — a comic who wrote for TV comedies like “Parks and Recreation” — died of a heroin overdose around the time Wittels Wachs’ daughter turned 1 year old.

“I just needed a place to put a lot of my inability to bring my brother back, my inability to change the fact that my daughter couldn’t hear,” Wittels Wachs said. “All of these things happened at once that I couldn’t fix.”

Wittels Wachs is the host of “Last Day,” a new podcast about the opioid crisis and the author of “Everything Is Horrible and Wonderful,” a memoir about grieving her brother.

Season 3 is a co-production of Kaiser Health News and Public Road Productions.

To keep in touch with “An Arm and a Leg,” subscribe to the newsletter. You can also follow the show on Facebook and Twitter. And if you’ve got stories to tell about the health care system, the producers would love to hear from you.

And subscribe to “An Arm and a Leg” on iTunes, Pocket Casts, Google Play or Spotify.

‘An Arm And A Leg’: Mom Vs. Texas In A Fight To Get Kids’ Hearing Aids Covered