At Richard Logan’s pharmacy in Charleston, Missouri, prescription opioid painkillers are locked away in a cabinet.

Missouri law requires pharmacies to keep schedule II controlled substances — drugs like oxycodone and fentanyl with a high addiction potential — locked up at all times.

He’s been a pharmacist for 40 years. For the last 20, he has also been a reserve deputy with two local sheriff’s departments, investigating prescription drug abuse. That puts him on edge in his day job.

After his technicians count out a prescription for controlled narcotics by hand, Logan has them place the pills on a machine that resembles an overhead projector lit from the top instead of the bottom.

“There’s a camera up there,” Logan said. “It actually photographs each pill that we dispense.”

When he has probable cause to suspect that a customer is trying to get opioids with a forged or fraudulent prescription, Logan will arrest them on the spot. When he only has a strong hunch and they’re from out-of-state, he’ll escort them out of the pharmacy and direct them to the nearest bridge out of Missouri, about 9 miles away. 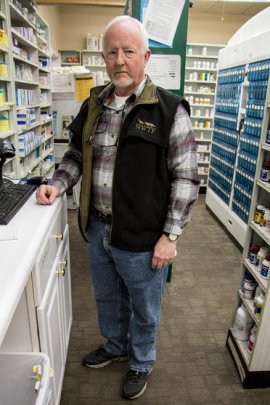 These run-ins with drug-seekers make Logan anxious to see the state enact a prescription drug monitoring program. A PDMP would be a statewide database tracking narcotics prescriptions, which doctors and pharmacists can check to catch signs of abuse or addiction and to intervene if necessary.

In the battle against America’s surging opioid drug addiction, 49 states, the District of Columbia and even Guam have all implemented some kind of PMDP. Missouri is the only state that hasn’t. A protracted political battle has kept the state from passing a law to establish one. That leaves pharmacists like Logan with few options.

He can only check the prescription history of patients on Medicaid, which tracks such data. But when a patient pays cash — a red flag for Logan — there is no record to check leaving pharmacists to guess whether the patient is in genuine pain, feeding an addiction or maybe looking for pills to sell.

“We want to take the best care of everybody that we can, and without a PDMP we are absolutely flying blind,” he said.

State Rep. Holly Rehder, whose district includes Charleston, has championed establishing a database ever since joining the legislature in 2013.

“I’ve been working on this since my feet hit the floor,” she said. 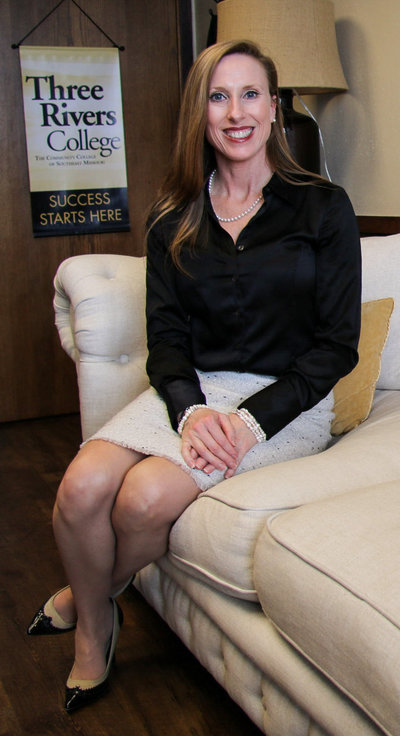 State Rep. Holly Rehder has championed establishing a prescription drug database since joining the legislature in 2013. Several members of her family have had addiction issues. (Bram Sable-Smith/Side Effects Public Media/KBIA)

It’s an issue close to her heart. Her cousin died of a drug overdose. Her mother was addicted to prescription medications. Her sister used heroin. And for 13 years, her own daughter has struggled with drug abuse — an addiction that began with a legal prescription for Lorcet.

“I’m very candid about it,” Rehder said. “I don’t believe God gave me a microphone to keep my mouth shut.”

She cites these databases’ success in limiting drug abuse in other states. They make it harder for pill-seekers to “doctor shop,” meaning go from doctor to doctor getting multiple, simultaneous prescriptions for the same drug.

One year after New York required its prescribers to check the state’s PDMP before writing a prescription, for example, doctor shopping dropped by an estimated 75 percent.

Doctors surveyed in many states, including Connecticut and Rhode Island, say prescription drug monitoring programs have helped them identify opioid drug abuse and intervene with patients who need help. Those are reasons the federal government strongly recommends the databases.

For the third straight year, Rehder’s bill has passed the Missouri House and moved on to the Senate. There, each year, it’s been blocked by her main opponent on this issue, Sen. Rob Schaaf, a fellow Republican.

“It’s just the heavy hand of government taking away your liberty,” he said. In 2012, before Rehder joined the legislature, Schaaf led an eight-hour filibuster of PDMP legislation, an act that has loomed over subsequent attempts to pass a similar bill. This year Schaaf has called the bill “dead on arrival.”

The bill is currently in committee where a hearing on it has yet to be scheduled — and it likely won’t be taken up by the full senate before the legislative session ends May 13. 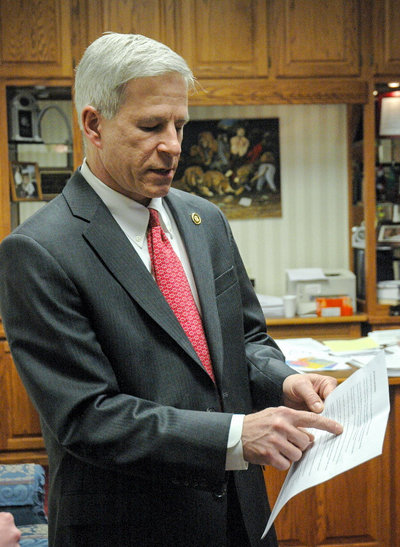 State Sen. Rob Schaaf points to evidence in support of his opposition to the database bill in his office at the Missouri State Capitol. He said the bill interfered with the right to medical privacy. (Jiselle Macalaguin/KOMU via Flickr)

Schaaf is a physician by training. To some, that background makes him a surprising opponent to prescription drug monitoring, which is supported by the Missouri Academy of Family Physicians, the Missouri American College of Physicians and the Missouri State Medical Association, among others.

He argues that drug monitoring may inhibit doctors from prescribing medications that patients really need. His main objection, though, is about privacy.

“The monitoring program would put every citizen’s private drug information on a government database accessible to 30,000 people with usernames and passwords,” he said. “That’s just an outrage.”

Rehder doesn’t buy that argument. The database is electronic medical information, she said, so it would be protected by the same privacy laws protecting all electronic medical records. “It’s not like anyone can go on a phishing expedition in this data.”

“There is no data that is secure,” Schaaf countered, citing hacks against the IRS and the Department of Veteran Affairs, and even Hillary Clinton’s email imbroglio.

Rehder argues that 49 other states have faced these same questions about security and Missouri would be able to follow the best practices they’ve developed.

Schaaf said he isn’t entirely opposed to prescription drug monitoring. He said he would allow Rehder’s bill to pass the Senate if it included a provision that final approval for the database would be put before the voters — a test he doubts the bill could pass.

For the past three years, he has proposed his own monitoring legislation that would limit access to the database to Missouri’s Bureau of Narcotics and Dangerous Drugs, which would then communicate concerns to providers.

Rehder said she can’t support his bill because it would be cumbersome and impractical to implement, and that it’s doctors who should be making decisions with the data.

“Missouri is the only state that doesn’t have this. It’s very shameful,” Rehder said. “It’s hurting our population so much.”

In March, St. Louis County, which has one of the state’s highest drug overdose death rates, passed its own PDMP. Other counties have signaled they would consider doing the same.

Rehder said this is better than nothing, though she prefers a statewide database over a patchwork of county systems.

“We have got to start realizing that this isn’t something we can close our eyes and turn our heads to because it’s not going to affect us. It’s affecting us,” she said. “Our families are being torn apart, lives are being destroyed.” 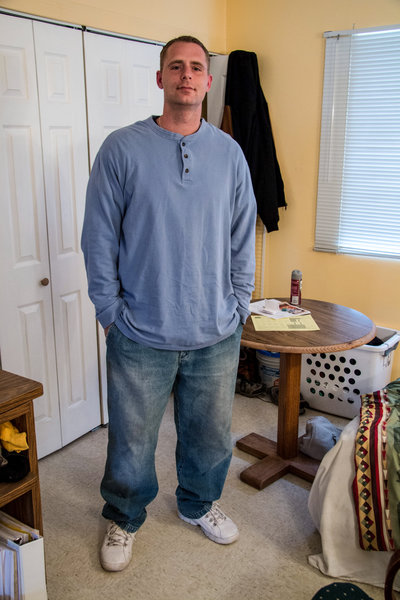 Jason Lynch has battled opioid use for 22 years, feeding his addiction with pills prescribed to him by doctors. Getting the pills “should have been a lot harder,” he says. (Bram Sable-Smith/Side Effects Public Media/KBIA)

Twenty miles down the road from Logan’s pharmacy and also in Rehder’s district, 33-year-old Jason Lynch is close to completing a 120-day stay at Mission Missouri, an addiction treatment facility.

Lynch was given his first prescription painkiller by an older student on the school bus when he was just 11 years old.

“I think right from the get-go I was hooked because the next day I was trying to get some extra lunch money to buy some more,” Lynch said.

He’s battled opioid use for 22 years, feeding his addiction with pills prescribed to him by doctors. “I would research [symptoms] on the Internet and say, ‘This is what’s going on with my back.’ ”

Usually, Lynch said, the doctor would write him a prescription.

“It’s nobody’s fault but my own,” Lynch said of his addiction, but, he added, getting the pills “should have been a lot harder.”

“You just think about what if those drugs weren’t so available to him,” Rehder said. “How could his life have been different?”

This story is part of a reporting partnership with Kaiser Health News, Side Effects Public Media, KBIA and NPR.