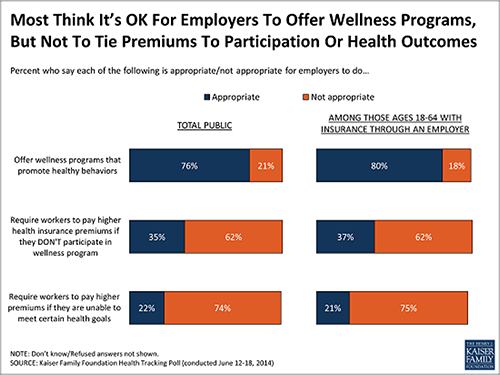 Workers believe employer wellness programs should be all gain but no pain, according to a poll released Tuesday.

The poll from the Kaiser Family Foundation found employees approve of corporate wellness programs when they offer perks, but recoil if the plans have punitive incentives such as higher premiums for those who do not take part. (KHN is an editorially independent program of the foundation.)

Wellness programs, which are encouraged under the federal health law, are structured in various ways. In some plans, the worker has to join a particular program, such as an exercise class, while others focus on outcomes, such as the employees’ blood sugar or cholesterol. Evidence is mixed about whether any substantially improve workers’ health or lower costs to employers and insurers.

The poll found 76 percent of workers thought it was appropriate for employers to offer wellness programs that promote healthy behavior. But a majority opposed wellness plans that had financial repercussions for workers: 62 percent did not think employers should charge higher health insurance premiums to workers who did not participate, and 74 percent said management should not charge more to those who did not reach health goals.

The Obama administration is allowing employers to link up to 30 percent of health premiums to wellness programs. Penalties and rewards for participating in a tobacco cessation program can be as high as 50 percent of the insurance plan cost.

The poll found that among workers who get health insurance from their employer, 48 percent said there was a wellness program in their workplace. Six out of 10 people said they participate; women were more likely to take part than men.

On another topic, the pollsters found that six of 10 people are following the problems at Veterans Affairs hospitals, some of which are accused of covering up the long waits some patients had before getting care. The VA scandal is the most closely followed health story of the year so far, the poll found, though more people have paid attention to the missing Malaysia Airlines flight, the kidnapped Nigerian schoolgirls and the Russia-Ukraine conflict.

Sixty three percent think the problems are widespread throughout the VA, while 22 percent believe they are isolated to a few facilities. Those who live in a household with someone who served in the military are even more likely to believe the problems are systemic. However, the poll indicated there are gaps in knowledge: Of those who said they are following the VA scandal “very” or “fairly” closely, two out of three were able to correctly answer that General Eric Shinseki resigned as Obama’s secretary of veterans affairs.

The poll found little change from last month in how the public views the health law. For the first time, however, more people said they were basing their impressions on their own experiences and those of friends or family, instead of on information gleaned from television, radio and newspapers.

“As implementation proceeds, more people may be having direct experience with the law themselves or through their loved ones,” the pollsters theorized. “It’s also possible that as coverage of the law has been out of the media spotlight for the last few months, fewer people are hearing about it in the news, resulting in a declining share who report taking cues from the media.”

The poll was conducted June 12 through 18th among 1,202 adults. The margin of error was +/- 3 percentage points for the general population and larger for subgroups.