Most Americans value the prescription products the drug industry produces, but they sure don’t like the prices and want the federal government to take action, according to a new survey.

Just over half of Americans (54 percent) are currently taking a prescription drug. While most say their drugs are easy to afford, consumers in general (72 percent) believe drug costs are unreasonable, according to the poll by the Kaiser Family Foundation. (Kaiser Health News is an editorially independent part of the foundation.)

More people (51 percent) think competition would do a better job of controlling prices than federal regulation (40 percent). But large majorities said they would favor allowing Medicare to negotiate with companies on prices and allowing people to buy medicines imported from Canada.

Prescription prices have come under scrutiny as even some people with insurance struggle with the costs, particularly for some drugs for cancer and other hard to treat illnesses. The health insurance industry has mounted a major public relations campaign on the issue, countered by pharmaceutical industry claims that drugs can drastically reduce the need for other health spending like hospital stays.

The KFF poll, conducted by phone Aug. 6-11, used a nationally representative sample of 1,200 adults. The margin of error is plus or minus 3 percentage points. 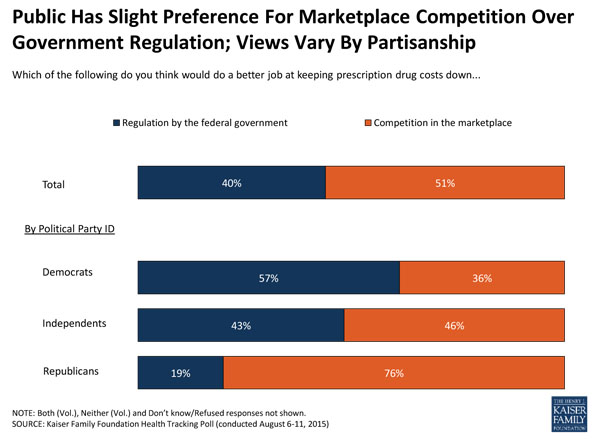