Employees love to gripe about rising health care costs, but a new poll finds most are not willing to sacrifice to pay less for their insurance.

Only 27 percent of people with insurance provided through their employer said they would  accept a more restricted list of doctors and hospitals in their networks, according to the latest monthly poll from the Kaiser Family Foundation. (KHN is an editorially-independent program of the foundation.) Less than a third of those polled were willing to pay more for brand name drugs or pay higher deductibles in return for lower premiums. 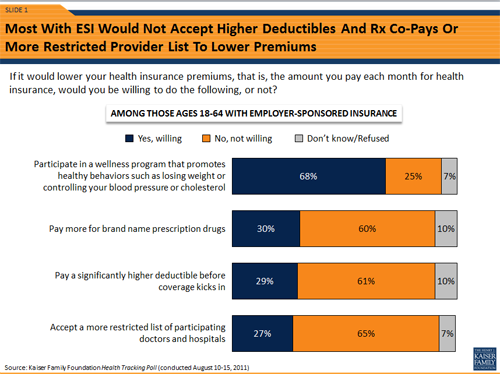 Only one idea floated in the poll — having people participate in corporate wellness programs promoting healthy behaviors — won over a majority of employees: 68 percent said they’d be willing to take part in one of these programs in exchange for lower premiums.

The poll found that most workers don’t blame their companies for the escalating cost of health care. Two out of three said they were offered the best coverage the company could afford given financial circumstances. A whopping 88 percent reported a somewhat or very positive experience with their employer-provided health care plan.

One of the major goals of the health law was to help extend insurance to 32 million Americans. But half of the uninsured surveyed don’t know about several major parts of the law designed to help them, including its provisions to help finance medical coverage. Nearly half didn’t think the law will make a difference for them. A third think it’ll improve their situation and 14 percent think it’ll harm them. (Because the poll only interviewed 154 uninsured adults, the margin of error on these questions was pretty wide, +/- 9 percentage points.)

The poll found two-thirds of Americans are positive about one new government action on health care: the new rule that requires insurers to cover the full cost of birth control and other preventive health services for women. Not surprisingly, support is strongest among those of child-bearing age, while seniors are split about the plan.

One final interesting observation from the poll results: while Democrats like the health care law more than Republicans, the partisan divide has been shrinking since the bill was signed in spring of last year. Democratic support has dropped by 18 percentage points to 60 percent favoring the law — the lowest level since passage — while GOP support has risen 11 percent, to 24 percent favoring the law. 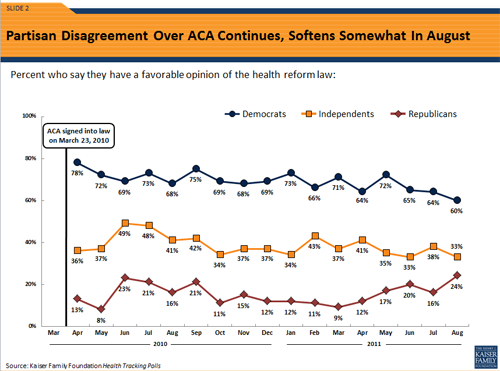 The poll was conducted August 10 through 15, with 1,201 adults queried. The margin of error was +/- 3 percentage points for questions answered by everyone, and +/- 5 points for people with employer-provided health insurance.