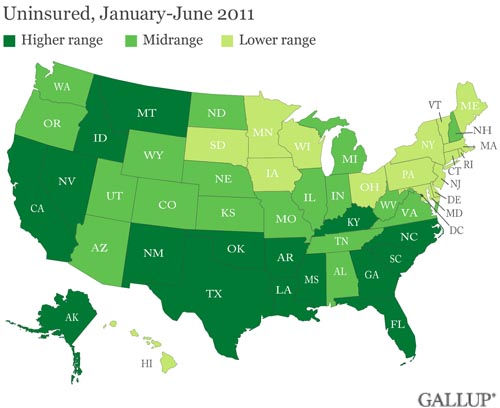 Everything is bigger in Texas, including the number of uninsured residents.

The U.S. Census Bureau will release its own data for uninsured rates from 2010 on Sept. 13.  The Census Bureau’s 2009 Current Population Survey (CPS) reported 26.1 percent of Texans as being uninsured.

Gallup and Healthways conducted telephone interviews with 177,237 people across the country between Jan. 1 and June 30 of this year as part of their Well-Being Index.  The Well-Being Index looks at six ‘sub-indexes’ (life evaluation, physical health, emotional health, healthy behavior, work environment and basic access) to assess the overall health of residents of the U.S. and the U.K.

The survey’s timing is interesting, coming just one day before the scheduled debate among GOP presidential candidates. Why? Current front-runner Gov. Rick Perry is expected to go after former-front runner Mitt Romney on Masschusetts’ health care law.  That law is credited with the state’s state’s ranking in the Gallup poll as having the lowest percentage of uninsured in the nation (5.3 percent).

The survey’s six-month sample had a margin of error of ±0.2 percentage points, but Healthways reported a drop in overall health coverage in the month of July, leaving 82 percent of Americans insured.