The type of proposal championed by Republicans to overhaul Medicare by giving beneficiaries a fixed amount of money to purchase insurance could lead to significant increases in premium costs in some parts of the country, according to a new study.

If the plan had been in place in 2010, six in 10 Medicare beneficiaries—about 25 million people both in traditional Medicare and in private Medicare Advantage plans —would have faced higher premiums if they didn’t switch to a cheaper plan, according to researchers at the Kaiser Family Foundation. (KHN is an editorially independent program of the foundation.)

The study modeled the impact of a generic version of premium support, under which beneficiaries would receive a defined subsidy, or voucher, to buy health insurance in a competitive market instead of getting a guaranteed set of benefits as Medicare has traditionally provided. That payment would be tied to the second lowest cost plan offered in an area or traditional Medicare, whichever is lower. This kind of a change is a central part of the House Republican budget written by Rep. Paul Ryan of Wisconsin, now the GOP’s vice-presidential candidate, and it has also been embraced by GOP presidential nominee Mitt Romney. Even a few Democrats have flirted with such a plan as a way to leverage market efficiency to rein in the spiraling cost of Medicare.

The new study estimated how the plan would have worked in 2010 by looking at the cost of traditional Medicare and private Medicare Advantage plans around the country. The study’s authors emphasized that their model was not an exact replica of any existing proposal for a variety of reasons, including that most plans, among them Ryan’s, wouldn’t phase in for a decade and even then would affect only new Medicare beneficiaries.

The study found that 59 percent of Medicare beneficiaries would have paid higher premiums in 2010 unless they shifted into a cheaper plan. In California, Michigan, New Jersey, Nevada and New York, average extra premiums would exceed $100 a month, and in Florida they would exceed $200 a month, the study calculated.

Medicare spends vastly different amounts per beneficiary around the country, ranging from less than $500 a month per beneficiary in some places to more than $900 a month per beneficiary elsewhere. That’s often because people in some areas of the country are sicker and need more care; it’s also because providers in some places favor more interventions and more expensive ones. In those high-cost areas, beneficiaries would see significant monthly increases in premiums if they remained in traditional Medicare. The study found people in Los Angeles would have paid $260 more and people in Miami would have paid $492 more, for instance.

In other regions where Medicare costs were low—such as Alaska, Delaware, Hawaii, Wyoming and Washington, D.C.— people in traditional Medicare would not pay more, but people in many private Medicare Advantage plans would face higher premiums if they didn’t want to change to traditional Medicare. People in Portland, Ore., for instance, would have paid $211 more a month and people in Honolulu would have paid $254 a month to stay in their preferred private plan. About one in every four Medicare beneficiaries are now enrolled in these private plans, some of which are preferred provider organizations while others are HMOs.

Although the fight over premium support often has been characterized as a battle between defenders of traditional Medicare and proponents of private health plans, the study found that it could have a substantial impact on people who enrolled in Medicare Advantage plans. Nationwide, 88 percent of those beneficiaries would have paid more to stay in their plans, averaging $87 more per month, if it had been in place in 2010.

Of course, getting many beneficiaries to switch to less expensive plans is how the architects of premium support envision saving money. They say it will bring pressure on insurers, doctors and hospitals to offer lower prices. The study noted, however, that such shifts might mean significant changes in the type and quality of care for beneficiaries.

In some regions, the low cost plans might be HMOs, which have tightly controlled networks of doctors and hospitals. If beneficiaries switched from traditional Medicare to HMOs,  they might not be able to keep seeing their regular doctors or go to their preferred hospital. In other areas, beneficiaries –perhaps people in private plans that coordinate care – might not like shifting into less costly traditional Medicare.

“Beneficiaries’ preferences and plan choices are not purely driven by premiums, and some beneficiaries may not view the low-cost plan, whether a private plan or traditional Medicare, as optimal for meeting their individual needs and circumstances,” wrote the authors, led by analyst Gretchen Jacobson.

Other studies have found that only a small portion of Medicare beneficiaries switch their Part D prescription drug or Medicare Advantage plans each year, even when doing so could save them money. “There are tradeoffs involved in making changes and we know from Part D and Medicare Advantage that people don’t really change very often,” said Tricia Neuman, who oversees the foundation’s Medicare analyses.

The study did not estimate how much money the plan would have saved Medicare. In a statement, the Romney campaign said: “As the authors stress, this is not a study of the Romney-Ryan plan. Our plan would always provide future beneficiaries guaranteed coverage options with no increase in out-of-pocket costs from today’s Medicare.” The Obama campaign trumpeted the study, saying it “demonstrates how hollow” is Romney’s claim that the elderly would retain the option of enrolling in traditional Medicare under their plan.

Joe Antos, a health care expert at the American Enterprise Institute, said that the study is “the best technical study so far of this sort,” although he expected a premium support market would be much more competitive than the current Medicare Advantage market is, since the latter is guaranteed a certain payment by the federal government.

“The competition would be even more intense,” he said, especially since most Medicare beneficiaries would not be able to afford anything more expensive than the benchmark plan, and thus insurers would compete to meet those prices.  “You just can’t have high costs if people can’t pay it,” he said. 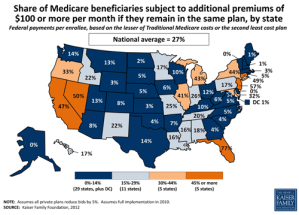