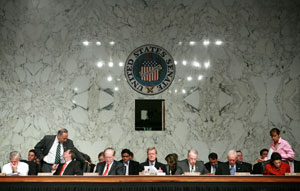 Proponents of the Senate Finance Committee’s health care bill say the legislation will limit the amount that lower- and middle-income people must pay for health insurance to a maximum of 12 percent of their incomes.

Because premiums generally rise faster than wages, consumers getting subsidies would pay a larger percentage of their incomes toward premiums over time. But the provision means slower-growing subsidy costs for the government. That trade-off reflects the difficult balancing act lawmakers face as they try to hold down the bill’s overall price tag while also trying to provide financial help to millions who will be required to have coverage, but may not be able to afford it.

The first year the legislation would take effect, people getting subsidized coverage would be required to pay from 2 to 12 percent of their incomes for insurance. The government would pick up the rest of the tab. People with lower incomes would pay less and those with higher incomes more.

But in the second year, it changes. From then on, it is based on a percentage of the premium that was paid the first year, no matter how far premiums rise.

For years, health insurance premiums have risen faster than wages, and the trend is expected to continue.

“People are going to have to keep paying more and more,” says Judith Solomon, a senior fellow at the Center on Budget and Policy Priorities, a nonpartisan Washington research group that looked at the effect in a recent paper.

The way the subsidies are indexed, she says, has so far taken a back seat to a larger debate among lawmakers, budget hawks, consumer advocates and others that is more focused on the size of the subsidies  and how much of their income people should initially be forced to put toward coverage.

How It Would Work

Solomon’s paper offers an example of a family of three making 220 percent of the federal poverty level, or about $40,282. In the first year, the family would be required to pay 8 percent of its income for premiums, or $3,223. That amount represents 29 percent of $11,083, the average 2009 cost of high deductible family coverage offered by employers.

Let’s assume in subsequent years that the family’s income kept pace with inflation and they remained at 220 percent of the federal poverty level. They would continue to pay 29 percent of the cost of the premium. But because premiums are likely to rise faster than inflation, Solomon’s analysis found, the family’s cost would soon rise above 8 percent of their income.

Since 1999, insurance premiums have jumped 131 percent, while wages increased 38 percent, according to a survey by the Kaiser Family Foundation. (KHN is a program of the Foundation.) This year, the average premium for all family policies rose about 5 percent, to $13,375 annually, the foundation reported, while workers’ wages rose 3.1 percent.

Robert Laszewski, president of the consulting firm Health Policy and Strategy Associates in Arlington, Va., says the indexing makes it harder for Congress to meet President Barack Obama’s goals of providing affordable coverage. “The president has promised health insurance security for the middle class, but there are problems with that,” he said. “The first is the size of the subsidies to start with. And apparently, the way that Senate Finance has structured the plan, the subsidies as a percentage of income will dwindle each year.”

All the major bills before Congress have subsidies for people under 400 percent of poverty, which is currently $73,240 for a family of three. They all link the amount people getting subsidies would have to pay to a percentage of their income in the first year.

The Finance Committee provision (.pdf) would help hold down the amount of federal subsidies needed, by shifting more of the growth in costs to consumers over time. Already, subsidies represent about $450 billion of the estimated $900 billion price tag of the legislation over 10 years.

“They did this to make subsidies a little cheaper,” says Karen Pollitz, research professor at the Health Policy Institute at Georgetown University. “But it means that if you’re [a low-income policyholder] struggling in the first year, it will get harder and harder unless we have some massive breakthrough in cost containment” and the growth of premiums slows.

A policy paper by Elise Gould and Alexander Hertel-Fernandez at the Economic Policy Institute, a nonpartisan Washington think tank, says payments by low- and middle-income families should be based on a percentage of income, not premium costs so that “subsidies do not become grossly insufficient over time.”

Still, linking how much people who qualify for subsidies pay for their insurance to a percentage of their premiums is similar to what many employers do.

On average, employers pay 73 percent of the cost of family coverage, with workers picking up the rest, the Kaiser survey shows. If premium costs rise, employers often pass along to workers that same share of the increase. So, if a premium rises by $600 for the year, the employer would pick up $438 and the worker would pay the rest.

“Worker premiums have been going up faster than earnings and they’re seeing it cut into their take-home pay,” says Paul Fronstin of the Employee Benefit Research Institute. “It sounds like the way this legislation is structured, it will continue that” for those with subsidies.

Economist Uwe Reinhardt of Princeton says it would be better to limit the amount paid by lower income families to a percentage of income, even if it required more federal money for subsidies.

“That way the risk is borne by the taxpayer,” says Reinhardt. The way the legislation is written, he added, “the risk of the premium increase is borne by the low-income family.”

Solomon says although this issue has not generated much debate yet, it could if enacted.

But the growth over time of how much people pay toward premiums “will be one of the things to look at once implementation goes forward,” Solomon says. “It gives at least the feeling that there is a real stake in keeping [premium] growth down.”