As debt-talks smolder in Washington, a proposal by the bipartisan “Gang of Six” senators to cut health program spending and increase revenue has scored a lot of attention. Among the proposal’s key health program tenets is the repeal of the Community Living Assistance Services and Supports Act, the CLASS Act, that is part of last year’s health care law. 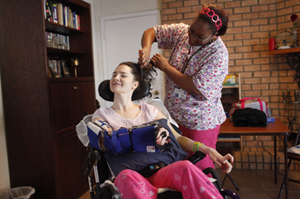 Home health worker April Quinn brushes Holly Hawthorne's hair to make sure there are no knots in it from laying in bed in this photo from early 2011. Hawthorne, 32, is in the Medicaid managed long care program. (Photo by Joshua Anderson)

The CLASS Act is a voluntary, long-term care insurance program in which working Americans who join would generally have premiums withheld from their paychecks. After they have contributed for five years, they would be eligible for a cash benefit if they became disabled and suffered from at least two limitations in daily activities, such as eating, bathing and dressing. Some critics are worried that the CLASS Act would become a new unsustainable entitlement, but advocates say the program would provide assistance to people who need long-term care but can’t afford it.

At ThinkProgress, Judy Feder, Harriet Komisar and Paul Van de Water write about why CLASS should be preserved. “On the help side, CLASS addresses a huge hole in our social safety net: neither private insurance nor Medicare protects people against the risk of needing extensive and long-term help with fundamental tasks of daily living like eating, bathing or getting dressed,” they write, adding, “On the deficit side, CLASS actually helps the budget in the coming decade because CLASS will collect premiums well before it will be obligated to pay benefits. Over the long term, the Secretary of Health and Human Services is required to design benefits and set premiums to assure that the program covers its costs — a standard CBO judged that CLASS can satisfy over the next 75 years.”

But Harold Pollack, at the Century Foundation’s Taking Note blog wonders if this is the death-knell for the CLASS Act. “Given Kent Conrad and Max Baucus’s dislike of CLASS, I’m not all that surprised by this outcome … ,” he writes. “In a different political moment, CLASS would have greater chance of survival. Our current polarized environment prevents us from performing reasonable technical fixes when challenges to complicated proposed programs become known.”

Keith Hennessey writes that repeal would be a “big deal. This is the little-discussed but hotly disputed new long-term care insurance benefit in the Affordable Care Act. Spending hawks are concerned the cost of this benefit will explode in the long run. Repeal is a big deal fiscally, as a health policy matter, and politically.”

Howard Gleckman, at his Caring For Our Parents blog, says the move could mean a return to the old way of paying for long-term care, Medicaid. “While CLASS is deeply flawed, it is an opportunity to transform long-term care from the means-tested Medicaid program to an insurance-based system. If CLASS is repealed, that opportunity will be lost, and millions of Americans will find themselves with only a shrinking Medicaid benefit to support them in frail old age or if they become disabled at a younger age.”

At The Incidental Economist, Don Taylor looks for the best way to insure long-term care. He outlines six policy “big picture” points. “If ever there were a risk that called out for social insurance (broad spreading of premium in return for broad coverage) it is LTC. The policy answer is risk pooling and the private market has failed to do it.”

At Reason Magazine’s Hit & Run blog, Peter Suderman doesn’t lament the prospect of the loss of the CLASS Act. In fact, Suderman also calls out a proposed Health and Human Services strategic branding strategy for the CLASS Act. “The Community Living Assistance Service and Supports (CLASS) Act is a long-term care insurance program and quasi-entitlement attached (to) the last year’s health care overhaul despite the fact that every reputable analyst deemed it unworkable and unsustainable. … Obama’s own fiscal commission last year recommended shuttering the program completely. And one of the best parts about the Gang of Six bipartisan budget compromise released yesterday is that it follows suit by closing CLASS for good. The administration doesn’t need a ‘strategic brand’ for CLASS. It needs a stop work order.”

At The Heritage Foundation’s The Foundry blog, Alison Acosta Fraser writes about “What’s wrong with the Gang of Six Plan?” and talks the CLASS Act: “Repealing the CLASS Act — the new entitlement to long-term care for the elderly — is a great idea.  But repeal is likely to happen with or without the Gang’s plan.  Everyone agrees the entitlement’s Ponzi Scheme financing is doomed to fail, making elimination the only viable option.”

Preserve Or Repeal The CLASS Act? Debt Talks Focus In