Here’s another reason health care inflation is down: The slowing growth in MRI scans, CT sessions and other diagnostic imaging that began in the mid-2000s has continued, paired with sharply lower Medicare reimbursements. 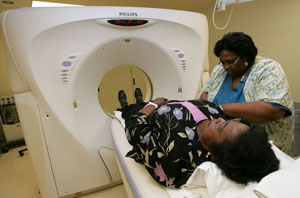 The end of the MRI boom may not rank with the poor economy, high-deductible health plans and expiring blockbuster drug patents as a factor in slowing cost trends — scans make up about 5 percent of total medical spending, according to the American College of Radiology —  but it should please insurers and government officials who were complaining about it a few years ago. MRI scans can cost from $400 to more than $3,000 per pop.

“There has been a lot of attention focused on over-utilization of imaging,” said Dr. David C. Levin, chairman emeritus of the radiology department at Thomas Jefferson University Hospitals in Philadelphia. “Doctors all around the country are being bombarded with material and literature saying, ‘We’ve got to cut down on the use of imaging. We’ve got to try to reduce the cost of care.'”

Forthcoming papers by Levin and colleagues will show declines — not just slower growth — in outpatient MRI, CT and cardiac nuclear scans per Medicare beneficiary in 2010, “the first time” that has happened, he said. The group analyzed data from Medicare Part B. (A 2010 decline in imaging volume also shows up in the Medicare Payment Advisory Commission’s latest data book.)

It’s not just the rate at which doctors are ordering and performing diagnostic radiology that has changed. They’re getting paid less for it, too, at least by Medicare. A new study published by Levin’s team in the Journal of the American College of Radiology shows a 21 percent plunge in spending on diagnostic imaging by Medicare Part B from 2006 to 2010 — from $11.91 billion to $9.46 billion.

Several years ago the government began cutting what it paid for MRI scans, demanding discounts for multiple examinations in the same session, changing the formula for calculating physician expenses and making other payment adjustments. Everybody knew reimbursements were down, Levin said, “but I don’t think people were aware of the aggregate effect.”

What’s going on in Medicare is probably happening with private health insurers, too, he said. Most have hired “radiology benefit management” companies to second-guess doctors who order expensive scans. Levin believes RBM firms may be the most important factor in reducing the growth in radiology procedures. While Medicare isn’t using them yet, knowledge that somebody is looking over their shoulder has probably prompted physicians to order fewer scans for all their patients, he said.

With the expansion of coverage promised by the Affordable Care Act, “it’s possible that the use of imaging might go back up in the general population, but nobody really knows” he added. “In the Medicare population you’re going to continue to see a drop-off.”

Pressure From Insurers, Government Cuts Radiology Use And Spending