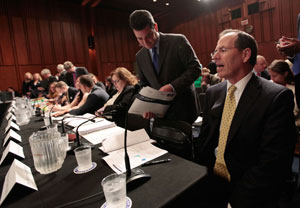 Employers and health insurers could give larger discounts to employees who lose weight or lower their cholesterol under a health care overhaul proposal that’s being assailed by AARP, the American Heart Association and other groups that fear it could result in higher premiums for people who don’t achieve those fitness goals.

The discounts are being pushed by Steve Burd, the chief executive officer of Safeway Inc., who has met with several lawmakers on Capitol Hill and says that rewarding healthy behavior has helped keep his firm’s health care costs flat while other companies’ have skyrocketed.

But the proposal, which involves the sensitive issue of how aggressive employers can be in trying to induce workers to change their behavior to reduce their risks of disease, is greeted by skepticism by many patient advocates who think it could be coercive and unfair.

“If you give one person a discount, someone else is going to end up paying more,” said Paul Cotton, senior legislative representative, federal affairs, at AARP, one of more than 60 groups that’s fighting the provision. “So the people who aren’t able to change their behavior or participate in the program will end up paying more. Our fear is that premiums will become unaffordable for people who can’t change their behavior.”

Under current law, employers and insurers are permitted to give discounts of up to 20 percent on premiums, co-payments or deductibles to workers who take part in wellness programs, which include anti-smoking and weight-loss programs. Some wellness programs simply require participation in order to get the discount but other programs require employees to reduce their weight, blood pressure or cholesterol by specific levels.

Proponents say the measure would improve health and lower costs, and that workers who can’t hit specific targets could seek a medical exemption. “There is significant savings and significant positives to encouraging people to live healthy lifestyles and reward people monetarily for doing it,” said Sen. Judd Gregg, R-N.H., a co-sponsor of the amendment to the health committee bill. “That’s just common sense and we should do it. If you create a healthier workforce by incentivizing healthy lifestyles you reduce the overall cost of health care for everyone.”

But critics say the efforts raise big questions about privacy and fairness. They note that corporate wellness programs often administer surveys that ask employees personal questions. One survey, for example, asks how often in the past week the individual had crying spells, was depressed, or felt that “people disliked me.”

The groups fighting the provision say that while many employees might want to exercise and eat right, some might find that work schedules and family commitments prevent them from making the lifestyle changes needed to improve health. Lower-income workers, in particular, might not be able to afford gym memberships, even with employers’ subsidies.

“We are very concerned that individuals not be penalized  either financially or by exclusion from coverage or services  if they are sick or if they presently engage in specific behaviors or have certain health conditions, such as smoking or obesity,” the groups wrote to Congress.

Some health advocates are more comfortable with linking financial incentives to other factors, such as refilling prescriptions or monitoring blood sugar on a regular basis, as opposed to meeting a specific fitness target. “Once you get into paying more for specific outcomes, for many people that does cross over the line,” said Ken Thorpe, executive director of the Partnership to Fight Chronic Disease, a coalition whose members include groups representing patients, health care providers and business and labor.

Employer groups are urging lawmakers to increase the level of discounts in premiums, co-pays and deductibles they can give to workers who participate in wellness programs. “The value of health insurance premium discounts or rebates to promote employee participation in wellness programs has had and will continue to have a cost savings effect on multiple levels for our health care system,” the groups, which include the Business Roundtable and the U.S. Chamber of Commerce, wrote to members of the House Energy and Commerce Committee. “They clearly motivate healthy behaviors as well as reduce health care costs.”

A Senate GOP aide said the amendment includes language to prohibit any discrimination against individuals who cannot attain a specific fitness goal due to medical reasons or other factors. Anyone who feels they cannot meet the standards can request a waiver or an alternative standard from their employer. An employer can also ask for a physician to certify that an employee has existing medical conditions preventing them from meeting a specific health goal. The programs must be “reasonable” and not “overly burdensome,” and open to all employees and participation must be voluntary.

Safeway’s Burd, whose company has given financial incentives to non-union employees to lose weight, cut tobacco use and reduce blood pressure and cholesterol levels, has said that obesity and smoking rates among employees in the voluntary program are roughly 70 percent of the national average. For the last four years, Burd has said, his company’s health care costs have been flat “while most American companies’ costs have increased 38 percent over the same four years.”

By Safeway’s calculations, “if the nation had adopted our approach in 2005, the nation’s direct health-care bill would be $550 billion less than it is today,” Burd wrote in a June 12 op-ed in the Wall Street Journal. Critics of Burd’s data have said they have has not been independently verified. A Safeway spokeswoman acknowledged that there has been no independent analysis, but “we were able to see savings clearly and immediately the first year we implemented the program.”