COLUMBUS, Ohio — Two years after it passed unanimously in Ohio’s state Legislature, a law meant to inform patients what health care procedures will cost is in a state of suspended animation.

One of the most stringent in a group of similar state laws being proposed across the country, Ohio’s Healthcare Price Transparency Law stipulated that providers had to give patients a “good faith” estimate of what non-emergency services would cost individuals after insurance before they commenced treatment.

But the law didn’t go into force on Jan. 1 as scheduled. And its troubled odyssey illustrates the political and business forces opposing a common-sense but controversial solution to rein in high health care costs for patients: Let patients see prices.

Many patient advocates say such transparency would be helpful for patients, allowing them to shop around for some services to hold down out-of-pocket costs, as well as adjust their household budgets for upcoming health-related outlays at a time of high-deductible plans.

At the Ohio Statehouse, the law’s greatest champion in state government has been Rep. Jim Butler, a Republican and former Navy fighter pilot whose wife is a physician. He authored the legislation and has beat the drum for it since he got the idea in 2013, as he waited for a garage mechanic to repair his car and absorbed the shop’s posted rates for brake jobs, oil changes and tuneups.

Opposition has been formidable, led by the goliath Ohio Hospital Association. It has filed a court injunction that is currently delaying enactment, peppered local news media with editorials, and lobbied Republican Gov. John Kasich, who has eliminated funding that would allow implementation from the latest state budget.

These groups say that the law, which applies only to elective procedures, is too broad and that forcing providers to create estimates before procedures would slow down patient care. “The only way to even try to comply with the law is to delay care to patients in order to track down information from insurance companies, who may or may not provide the requested information,” wrote Mike Abrams, the president and CEO of the Ohio Hospital Association, in an op-ed in The Columbus Dispatch in January.

But Jerry Friedman, a retired health policy adviser for the Ohio State University Wexner Medical Center, said the opposition doesn’t stem from genuine concern about patients but from a desire to keep the secret rates that providers have negotiated with insurers under wraps. Transparency would mean explaining to consumers why the hospital charged them $1,000 for a test, he said, adding that providers “don’t want to expose this house of cards they’ve built between hospital physician industry and the insurance industry.” 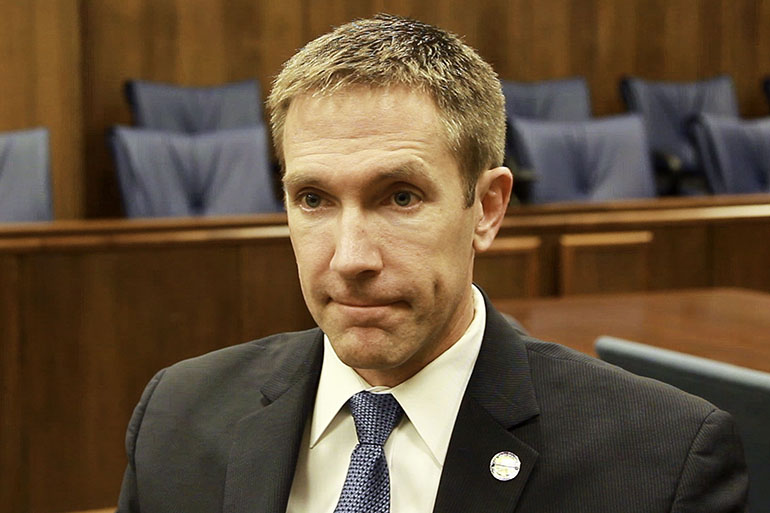 Said Butler on his quest to see the law enacted: “The health care industry has a lot of political power and lots of money. It’s hard to fight on behalf of people against this kind of force.”

The law’s next test will come in August, when the first court hearing on the association’s lawsuit is scheduled. The Kasich administration said it couldn’t comment on the law because of the pending litigation.

Greater price transparency has been a popular policy prescription for America’s high health costs, especially at a time when many patients have high-deductible insurance plans and face larger copayments. Upfront estimates exist in other countries, such as Australia and, for patients facing out-of-pocket expenses, in France.

In Massachusetts, patients can get an estimate within two days of admission if they ask for it. Nebraska requires hospitals and surgical centers to provide a list of the average charges for services. New Hampshire has a website where consumers can compare costs.

Hospitals and doctors often oppose such measures. The American Hospital Association’s position is that health plans — not hospitals — are responsible for telling insured patients about their out-of-pocket costs, according to its website.

Aimee Winteregg, 35, of Troy, Ohio, said she would have liked such information before five miscarriages in four years left her buried in unexpected medical bills. She and her husband became first-time parents in November. Though they are well insured, tests and treatment cost the couple $4,000 out-of-pocket, demanded in bills that were sometimes no more descriptive than for “medical service.”

“We don’t want to deal with this, especially when the doctor tells you stress is bad for the pregnancy,” her husband, J.D., said. But imposing greater transparency has been controversial in both the medical industry and among some health care researchers, who say it puts patients in an untenable position.

The transparency law “was written by someone thinking about health care as a TV, and not as health care,” said Sandra Tanenbaum, a professor of health services management and policy at The Ohio State University College of Public Health.

She said people could not shop for procedures as they would for a TV or car repairs, since they often lack information on the quality of doctors and hospitals, and make health care decisions based on much more than cost.

Consumers are more likely to base their decisions on their doctors’ advice, not on cost alone, according to a report from the Health Policy Institute of Ohio.

Only around 10 percent of health care costs are even “shoppable” expenses — procedures that can be scheduled in advance, like an MRI or elective surgery — according to the HPIO.

Regardless, Butler maintains, the health care industry can give consumers better information upfront. “If you really want patients to be empowered, they really need the information,” he said.

In support of such access, Butler has written letters to the Ohio Hospital Association, the Ohio attorney general and the Dayton Daily News, all in defense of the transparency law.

The Ohio Hospital Association, along with seven other Ohio health organizations, went to court last December to block the law, a month before it was supposed to take effect.

Butler said Gov. Kasich’s administration is helping the hospital association stall by not writing regulations, eliminating funding for the law in the state budget, and declining to meet with Butler to discuss it.

State Rep. Michael Henne, also a Republican, has worked with Butler in the Ohio General Assembly on the transparency law. He called Butler a “driver” on the law, noting: “It’s frustrating. You don’t realize how much [influence] special interests have in the process.”