Even as Congress moves to expand health insurance coverage to millions of Americans, it’s doing little to ensure there will be enough primary care doctors to meet the expected surge in demand for treatment, experts say.

The American Academy of Family Physicians predicts that the shortage of family doctors will reach 40,000 in the next 10 years, as medical schools send about half the needed number of graduates into primary care medicine. The overall shortage of doctors is expected to grow to nearly 160,000 by 2025, according to the Association of American Medical Colleges.

“I don’t see anything in the legislation that will greatly increase the primary care pipeline,” said Dr. Russell Robertson, chairman of the Council on Graduate Medical Education, which advises Congress. In addition to making sure patients have access to care, increasing the number and proportion of primary care doctors is crucial to lowering health costs, he said. Primary care doctors make up about a third of all physicians, though in most industrialized nations they make up half.

“We can’t bend the cost curve without increasing primary care providers,” said Robertson, who is also chair of family and community medicine at Northwestern University’s Feinberg School of Medicine in Chicago.

Almost everyone agrees on how to build up the supply of primary care physicians: create more residency positions at teaching hospitals for family doctors and internists to complete their training and significantly increase how much primary care doctors get paid by Medicare and other insurers. But there’s resistance to these steps because of their costs. 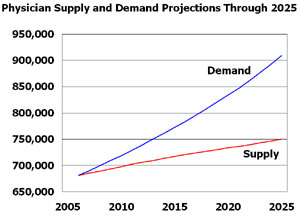 A proposal backed by Senate Majority Leader Harry Reid, D-Nev., and the teaching hospital lobby to add 15,000 Medicare-funded medical residency positions — a 15 percent increase that would favor more primary care training — was considered dead on arrival because of its $10 billion price tag over a decade. Proponents said it was a small price to pay, in legislation that could run as high as $1 trillion, to ensure that patients have access to doctors.

Instead, the House and Senate overhaul bills would redistribute about 1,000 unfilled residency positions to teaching hospitals that commit to creating more primary care residencies. The Senate Finance Committee bill would give 15 mostly southern and western states preference for those positions because they have a high proportion of doctor shortages or a low percentage of medical residents. Ten of these states have representatives on the Finance Committee.

Proposals to significantly increase Medicare payments for primary care doctors have gone nowhere in part because the money would come from payments to higher-paid specialists – who, not surprisingly, oppose a pay cut.

As they now stand, the House and Senate overhaul bills call for a 10 percent bonus for primary care doctors for five years, an increase in Medicare payment rates that most experts say would have only a slight impact on encouraging new doctors to go into primary care careers. Family doctors on average make about $173,000, less than half of what specialists such as cardiologists earn, according to physician recruiters Merritt Hawkins & Associates.

Dr. Darrell Kirch, CEO of the Association of American Medical Colleges, said the extra training slots emanating from the redistribution of unfilled residency position would amount to a “drop in the bucket.” Kirch noted that after Massachusetts in 2006 required residents to have health insurance, the demand for care quickly overwhelmed the state’s doctors. “It’s a huge issue that concerns us greatly,” said Kirch, whose association represents all 130 medical schools and nearly 400 major teaching hospitals.

Dr. Ted Epperly, a Boise, Idaho, family doctor who is president of the American Academy of Family Physicians, said family doctors would need about a 30 percent increase in pay to encourage more young physicians to enter primary care. “The bills are anemic,” he said, “but at least a step in the right direction.”

Some medical workforce experts applaud Congress for trying to target how it spends billions in medical education funds to help states with the biggest needs and to promote primary care over specialty care. “It’s good to see Congress for the first time step to the plate to work on rebalancing the physician supply,” said Dr. Mark Kelley, executive vice president of the Henry Ford Health System in Detroit and member of the Council on Graduate Medical Education. But like Kirch, Kelley said the redistribution of 1,000 residency slots will only make a small dent in the shortage problem.

The number of residency training positions for all doctors has been flat for years. That’s because in a budget-cutting move in 1997, Congress froze the number of Medicare-funded medical residency positions. Since then, the U.S. population has increased by more than 30 million  making the need for additional medical residents particularly acute, according to the Association of American Medical Colleges. While some teaching hospitals have added residency positions using their own money, those slots have largely gone to train specialists who can improve the facilities’ bottom line.

Obama administration officials say the Democratic health bills are doing more than paying lip service to the physician workforce issues. An official from the Health and Human Services Office of Health Reform said the 10 percent bonus to primary care doctors, additional loans and scholarships and a medical home pilot project will all help. In the medical home pilot, primary care doctors get paid extra money to coordinate care to the patients.

The bills would also increase funding to the National Health Service Corps, where primary care doctors can get up to $50,000 to help repay loans in exchange for working two to four years in a federally-designated physician shortage area.

Whatever the impact of those measures, they don’t address the main issue raised by experts such as Ken Raske, president of the Greater New York Hospital Association. Giving millions of Americans health insurance, while not increasing the doctor supply is a recipe for trouble in his view. “Providing a benefit that you can’t deliver the product on will be a real problem,” he said. “Without expanding the number of residency slots you are not increasing the pipeline.”