Fed up with the unpredictable cost of health insurance for his small business, Mike Sarafolean last year made a dramatic change: Instead of picking a plan to offer workers, he now sends them to a “private exchange” or marketplace where they compare and choose their own insurance. And the amount his company pays toward coverage is capped. 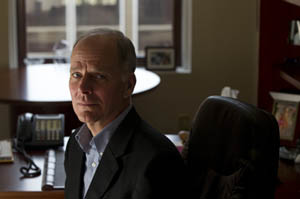 The move puts his St. Paul, Minn.-based company on the leading edge of a nascent trend that could shape how more employers offer and pay for their health benefits in the coming years. It is part of an ongoing evolution in job-based health benefits that is gradually shifting cost and responsibility to workers.

While representing only a tiny fraction of workplaces, the movement may be about to grow: One of the nation’s largest employer-benefits consulting firms — Aon Hewitt — said Wednesday it will launch an exchange aimed at large companies. It hopes to have at least 100,000 workers enrolled by early next year.

Proponents say the effort shields employers from unpredictable premium hikes because they will choose how much to increase their contribution each year and those amounts may be less than premiums actually increase. If so, workers would make up the difference.

Tempering such increases, proponents say, would be competition among insurers because workers would have a wider choice of plans, rather than the one or two currently offered by many employers.

“We’re trying to create a retail marketplace that is competitive,” says Ken Sperling, who is overseeing the Aon Hewitt effort. Employees would be able to choose among several carriers. “Insurers would have to compete for their business.”

What about state-based exchanges?

The exchanges, which have some similarities to state-based programs mandated by the federal health overhaul law, also save employers money partly because workers, when given a variety of choices, are likely to choose less generous benefit plans, which will carry lower premiums, say proponents.

“Most companies are over-insuring their employees right now. We want to right-size that,” says Curtiss Butler, chief marketing officer at Liazon, which also operates a private exchange.

Others, including Carmen Balber of the advocacy group Consumer Watchdog, caution that private exchanges potentially could be used by insurers to “cherry pick” employers with younger and healthier workforces. Balber also said private exchanges potentially could steer workers toward policies that have low premiums, but also high annual deductibles and other charges. Such policies are more profitable for insurers but can leave unprepared consumers on the hook for thousands in medical costs each year.

Private exchanges “absolve the employer from having any responsibility for providing benefits or getting a good deal for consumers,” says Balber.

Sarafolean, CEO of Orion Corp. of Minnesota, which provides services for people with disabilities, doesn’t see it that way.

Before he made the switch, Sarafolean said he had a limited number of insurance choices to offer his 70 workers: “I had to buy a plan that would make sense and fit for most people. Now they make choices that fit for them.”

For the past few years, his company faced “double-digit premium increases every renewal.” To slow those increases, Sarafolean said he had switched to a policy with large annual deductibles: payments of $4,500 by individuals or $9,000 by families before insurance began paying most medical costs. His employees also paid about $90 a month toward their premium.

A little more than a year ago, Orion received a 40 percent renewal increase, prompting him to move to Minneapolis-based Bloom Health, which set up private exchanges in Michigan, Minneapolis and Indiana.

Now, his company makes contributions ranging $125 a month for younger workers to $350 for older ones to special health reimbursement accounts, which workers then use to buy an insurance policy.

By making the change to a flat contribution and a private exchange, the company is saving 10 percent over its previous year’s cost of insurance, he says. Many of his workers also spend less, he says. 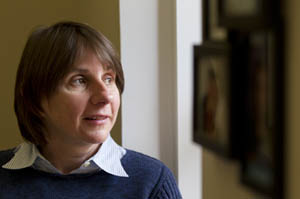 Gabrielle Smith, an employee of Orion Corporation of Minnesota, changed her benefit plan with the small company (Photo by Andy King).

He’s not sure what he will choose in 2014, when the state-based insurance exchanges are set to open as part of the health care law approved by Congress last year. Initially, those exchanges are aimed at individuals and small companies that are shopping for insurance. States can decide later in the decade whether to open them to large businesses.

Sperling, who is overseeing Aon Hewitt’s private exchange, compares the flat-payment change to one that gained speed in the early 1990s: Employers abandoning pensions in favor of offering workers 401(k) plans for retirement savings.

But just as 401(k) plans transferred the risk of market downturns to workers, the flat-payment model would shift risk to workers if rapidly rising health costs outpace increases in employer contributions.

“From a consumer point of view, it makes me nervous because as premiums go up, it’s simply a mechanism to cost-shift,” says Sabrina Corlette, research professor at the Health Policy Institute at Georgetown University in Washington D.C. “That said, if it allows a small employer to continue to offer insurance it’s not a terrible compromise.”

The model has been compared to House Budget Committee Chairman Paul Ryan’s proposal to cap government payments for future Medicare enrollees, giving them a set amount to buy coverage from private insurers. Under Ryan’s plan, the government contribution would grow with general inflation, which is less than medical inflation, saving taxpayer dollars, but substantially increasing beneficiaries’ costs, according to the Congressional Budget Office.

Sperling says he expects most employers will annually set increases in their health insurance contributions to an amount approximating wage increases  about 2 to 3 percent annually  which are generally well below medical inflation. But he says the competition created by the exchanges will help slow medical premium growth.

Unlike most of the private exchanges, the Bloom Health model, which serves about 25,000 people, sends workers to buy their own policies on the so-called individual market, rather than through a group health policy.

However, insurers selling individual policies in most states can reject applicants with medical problems, a practice that will end in 2014 under rules in the health care law.

Gabrielle Smith, a 16-year employee of Orion who has an auto-immune disease, worried that under Bloom she would be unable to get insurance “or it would be so in excess of what I could afford.”

Smith, 48, did get coverage  through Minnesota’s high-risk pool  and found that she still was able to lower her deductible by $1,500 a year compared with the former $4,500 deductible plan offered at Orion. She now pays $45 a month for her premium.

“I haven’t heard anyone who is unhappy with the current insurance because it was all individualized,” says Smith. “Some of the younger employees with no medical conditions (found low-cost plans that) don’t require any money out of their paychecks.”

Other private exchanges, including Buffalo-N.Y.-based Liazon, which serves about 25,000 employees in 23 states, and the new Aon Hewitt model send workers to group policies, which cannot reject applicants with health problems. The exchanges vary in other ways, too: While Bloom and Aon Hewitt offer a variety of insurers, for example, Liazon contracts primarily with one main health insurer in each region.

Aon Hewitt’s model would offer only five different types of policies, ranging from high-deductible “bronze” and “silver” level plans to a high-end “platinum” plan with a broad network of doctors and hospitals and minimal consumer spending on deductibles or co-payments.

All the exchanges plan to collect revenue by charging employers a monthly fee, receiving commissions from insurers, or both.

It’s unclear how the advent of state-based exchanges will affect programs such as Bloom, Liazon and Aon Hewitt, or whether there will still be a demand for their services by small businesses.

“As of 2014, why will the private exchanges be needed?” asks Paul Fronstin of the Employee Benefit Research Institute, a nonprofit research group based in Washington.

But Balber at Consumer Watchdog counters that the state exchanges may be better for consumers than private ones because states can choose to actively monitor the quality and cost of the insurers allowed to participate. In theory, private exchanges could do the same, but Balber is skeptical.

“To presume a private exchange is going to examine trends in premium increases and pressure insurers to lower prices is unlikely,” she says.

Benefit experts say there is growing interest in the move to a flat payment model, dubbed “defined contribution.” A March survey of very large employers by the HR Policy Association found that 36 percent are considering capping contributions for workers’ insurance over the next 10 years.

Some firms already set a cap on contributions for retirees, Fronstin says. But he predicts that most employers will take a wait-and-see approach before changing their health coverage for current employees.

Aon Hewitt’s Sperling says as the health system overhaul takes effect, most employers will continue to offer coverage to workers: “They’re either going to stay in the game and be more requiring of their employees (around healthy behavior) or will look for a realistic exit strategy, which could be a corporate exchange.”