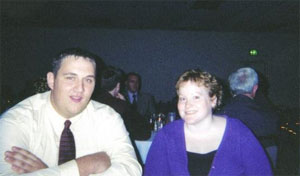 WARSAW, Ind. – Travis Funk, laid off a year ago from his job finishing boat interiors, hopes to land a job in a field he thinks has more promise: making artificial hips and knees for an aging population.

“I figured the best thing to do was get into the orthopedic industry,” says Funk, 29, who is taking algebra, blueprint reading and computer programming classes at Ivy Tech Community College here several nights a week. He hopes knowledge gained in the 12-month program will earn him a job in Warsaw, a small town in a lake-dotted part of rural Indiana known as the “orthopedic manufacturing capital of the world.”

Zimmer Holdings, Biomet and DePuy Orthopaedics are based here, along with several smaller device companies and suppliers. Together, they generate nearly one-third of the estimated $32 billion in global orthopedic device sales.

For much of the past decade, times have been good for the industry, with hefty profits from steadily rising sales of artificial hips and knees, bone screws and other devices worldwide. More than 700,000 hip and knee replacements are performed in the U.S. each year. That number could double by 2016, driven partly by osteoarthritis and other ailments, researchers told the American Academy of Orthopaedic Surgeons’ annual meeting last February. 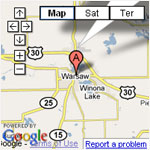 Yet the industry, succeeding even as some other U.S. manufacturing sectors are slumping, faces challenges: The recession has curbed demand for orthopedic devices worldwide as patients delay treatment, forcing layoffs at some companies. And a proposal that passed the Senate Finance Committee Tuesday would place up to $40 billion in new taxes on the medical-device industry in the next decade.

Device makers say such a tax would stifle job growth and innovation, adding to unemployment in regions such as Warsaw. But the health overhaul proposals could also bring benefits to the area, including helping provide subsidies so unemployed workers such as Funk could purchase health insurance.

Finance Committee Chairman Max Baucus, D-Mont., who proposed the tax, sees the levy as the device industry’s fair share in helping pay for legislation that could bring it millions of new insured customers. Orthopedic device industry profits are healthy: Zimmer Holdings and Stryker Corp. show five-year average gross profit margins of 76.5% and 68.3%, respectively, according to Thomson Reuters. Medical equipment and suppliers as a whole showed five-year gross margins of 59%, compared with 45.8% for the S&P 500.

Drugmakers and hospitals have agreed to help finance part of the legislation, expected to cost more than $800 billion over a decade, according to a Congressional Budget Office estimate. Pharmaceutical companies, for example, agreed to what they say is an $80 billion deal that includes cutting by half the prices they charge patients who hit a coverage gap in the Medicare drug program. Hospitals agreed to a $155 billion cut in Medicare reimbursements over a decade.

Jeffrey Binder, president and CEO of Biomet, says the device industry faces a double whammy. “This particular fee is completely out of proportion with what any other sector has agreed to do,” he says. “It would cost our company alone $45 million to $50 million a year. That’s the equivalent of approximately 800 jobs.” 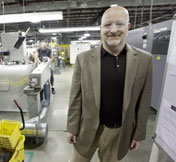 In addition, device makers, who sell directly to hospitals, would be under pressure to lower their prices as hospitals attempt to absorb their own cuts related to the health care overhaul, Binder says.

The fate of the tax is uncertain. A number of Democrats and Republicans oppose it. So, too, does the industry’s trade group, the Advanced Medical Technology Association, or AdvaMed, which says the tax would be passed on to consumers as higher prices – or result in job cuts.

The $4 billion-a-year-tax on the $130 billion medical device industry “is a devastating prospect,” particularly for smaller companies, AdvaMed’s President and CEO Stephen Ubl said at a press briefing in Washington Tuesday. The industry is lobbying hard against the tax, but Ubl says it supports other elements of the legislation, such as finding new ways to compare which drugs, devices and treatments work best.

Senate Finance Committee staff, speaking to reporters Monday, said the device tax is a flat amount based on each company’s market share, not product prices–a move meant to discourage passing the fee to consumers.

The controversy about the device tax illustrates how difficult it is for lawmakers to find ways to pay for their ambitious health care ideas. For months, proposals have come and gone – and come back again – including fees on soda pop and levies on the wealthy. A windfall-profits tax on health insurers and an excise tax on expensive individual health policies are under consideration. Device makers are just taking their turn in the hot seat.

“Congress has a not-in-my-backyard problem in health reform,” says Robert Laszewski, an Alexandria, Va.-based health policy consultant. “Everyone wants it, but someone else has to pay for it.”

The health care debate in Washington might seem a long way from this community two-and-a-half hours north of Indianapolis. But the topic is top-of-mind for the executives who run the device companies, the physicians who use the products produced in the plants, and people seeking jobs in the industry.

Funk is among the growing number of uninsured in Warsaw and its surrounding area. About 19% of people here have no health insurance, compared with 15.4% nationally, according to the most recent Census Bureau data. For Funk, the proposed tax is “a toss-up,” he says. A health overhaul would likely provide him with subsidies to help buy insurance, but could depress employment in the devices industry, making it more difficult for him to find a job. 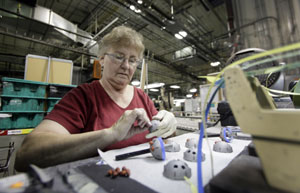 Liz Maierle prepares a part for the next process at the Biomet Inc. facility. Maierle has been with the company for 23-years (AJ Mast/KHN)

Today, device makers employ about 6,000 people in Kosciusko County, accounting for nearly 19% of the county’s private-sector jobs, according to a September report from BioCrossroads, a group formed by venture capitalists and philanthropic organizations to boost the life sciences industry in Indiana.

“It’s the only thing that provides a ray of sunshine in that part of state,” says Robert Guell, professor of economics at Indiana State University.

Jobs run the gamut, from Ph.D. chemists to machinists. Workers at Biomet and the other plants use high-tech computerized lathes to craft hips and knees from titanium. At Zimmer, which has its own foundry, workers in heat-protective suits pull molten-hot molds of joints from giant furnaces. Upstairs, scientists in nearly soundless offices research the next advance in device technology.

For a time, experienced workers were often lured from one company to another.

There was so much movement, “you almost had to keep a scorecard to know where your neighbor was working,” says Thomas Krizmanich, an orthopedic surgeon who lives and works in Warsaw. He says he has to be careful not to offend patients who work for one of the three big device makers by implanting them with competitors’ products.

“Every company would like you to use 100% of their product,” says Krizmanich. “It can be difficult to make three companies happy.”

The sagging economy has slowed job hopping – and hiring – in the past year. In August, unemployment in Kosciusko County, which includes Warsaw stood at 11.6%, vs. the national average of 9.7%, says database service Proximity. But that was still far below that of neighboring Elkhart, where the unemployment rate is 16%, in part due to a sharp downturn in the recreational-vehicle building industry.

The proposed tax on device makers is not the only issue dampening future employment prospects here.

Other countries are offering huge incentives to lure device makers overseas where labor costs and other expenses may be lower.

Zimmer Holdings and Biomet already have manufacturing plants overseas: Zimmer in Europe and Biomet in Europe and China. And while Biomet’s Binder says those plants mainly serve emerging markets, he acknowledges that some lower-skill production jobs have moved overseas.

It’s unlikely that orthopedic device manufacturing will leave the U.S. entirely because the high-tech skills are hard to transfer, says Larry Davidson, director of the Center for the Business of Life Sciences at Indiana University. 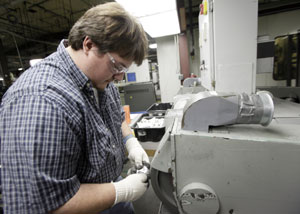 Jeremy Shepherd works on polishing a femoral knee component at the Biomet Inc. factory. Shepherd has been with the company for 14-years (AJ Mast/KHN)

“What has been helpful for that industry and will continue to provide jobs in the U.S. and Indiana is that it’s harder for that industry to separate the technology and product development from the manufacturing,” Davidson says.

Others are not so sanguine.

“It’s conceivable that (device makers) could move everything eventually,” says Nick Deeter, president and CEO of OrthoPediatrics, a Warsaw-based firm that develops orthopedic devices designed for children. He buys components from manufacturers based in the U.S. and abroad. “Machines do all the work now. Someone starts them and stops them. Even though it’s a high-tech product, it doesn’t take a skill.”

Other states and countries have tried to get Deeter to move his headquarters. “I have a pile of business cards from companies in Ireland,” he says. “Akron, Ohio, recently offered us a $3 million grant to move.” But he stayed, with the help of $4.4 million in grants and other incentives from Indiana.

The ongoing recession means job openings in the device industry are fewer and attract many more applicants, says Melissa Denton, workforce and economic development director at Ivy Tech in Warsaw.

Enrollment in Ivy Tech’s advanced orthopedic manufacturing skills training program has grown so fast – now up to 400 students – that the school has had to move into larger quarters twice since last year.

Funk expects to complete his training soon, although he might pursue a two-year degree: “I just hope someone hires me.”