This story was updated to add the price range for construction of proton therapy centers, rather than just the upper limit of that range.

Proton therapy has been touted as the next big thing in cancer care. The massive machines, housed in facilities the size of football fields, have been sprouting up across the country for a decade.

There are already 14 proton therapy centers in the U.S., and another dozen facilities are under construction even though each can cost between $50 million and $200 million to build. 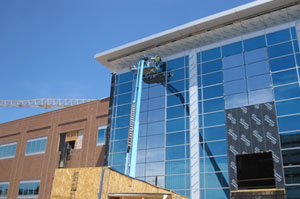 In this May 2013 photo, construction continues at the Maryland Proton Treatment Center in downtown Baltimore (Photo by Jenny Gold/KHN).

But Indiana University shocked experts who watch the industry last month when it announced that it plans to close down its facility in Bloomington, as reported by Modern Healthcare.

“I never thought that in my lifetime I would see a proton center close,” says Amitabh Chandra, a professor at Harvard’s Kennedy School of Government who studies the cost of American medical care.

He’s surprised because until now, industry growth has been entirely in the other direction, even though there’s little evidence that proton therapy is better than standard radiation for all but a few very rare cancers.

In the Washington, D.C., area alone, three proton therapy centers are under construction — one at Johns Hopkins Medicine Sibley Memorial Hospital, another at MedStar Georgetown University Hospital, and a third, the Maryland Proton Treatment Center, is slated to open at the University of Maryland in Baltimore next year.

All three say they are continuing to build their centers, despite the news out of Bloomington. In email statements, two said that the larger population of the DC-Baltimore area can support a proton facility better than a small city like Bloomington. The third said it’s building a smaller, one room center that will be more cost effective. 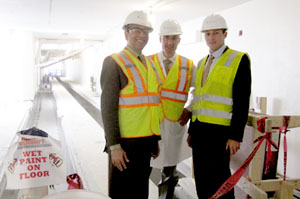 But in Indiana, a review committee determined that it just wasn’t worth spending the money that would be necessary to update their proton facility. One reason for the closure is that insurers have been refusing to cover the treatment for common diseases such as prostate and breast cancer. Cigna, for example, only covers proton therapy for a single rare eye cancer, says Dr. David Finley, the insurer’s national medical officer.

“When it’s used, however, for all other tumors, it’s not been shown to be any more effective than other forms of radiation therapy,” says Finley.

Proton beam therapy costs three to six times as much as standard radiation therapy for illnesses like prostate cancer, according to Finley. He adds that when insurers pay for expensive care that isn’t any better than the cheaper options, it can increase the cost of everyone’s health care.

“We said if two services offer the same result and one is much more expensive than the other one, we’re only going to pay for the one that is less expensive,” Finley says.

Other major insurers have also limited what they’ll cover with proton therapy, including Aetna and Blue Shield of California.

One health care payer that has not put any restrictions on proton therapy is Medicare. And Medicare pays much more for the treatment than it pays for standard radiation therapy.

But the doctors and researchers involved with building new proton beam facilities don’t think the treatment is dubious. They point to proton therapy’s potential to kill cancer without damaging surrounding tissue, and they say that it’s just a matter of time before clinical trials prove that proton therapy is worth the extra money.

This story was updated to add the price range for construction of proton therapy centers, rather than just the upper limit of that range.