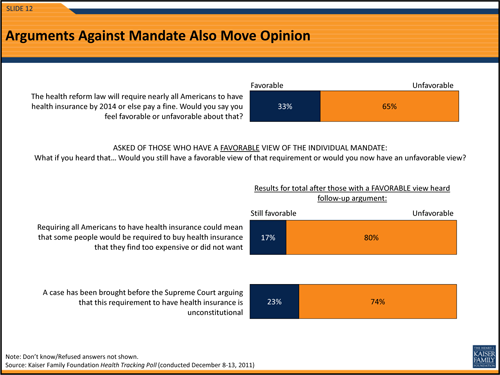 The individual mandate is the Affordable Care Act’s least popular provision and lies at the heart of the legal challenge to the law before the U.S. Supreme Court. But a new poll finds that public opinion can be swayed by how the mandate’s implications are described.

In general, only 33 percent of Americans support the individual mandate, while 65 percent oppose it. Opposition swells to 74 percent after people are told the mandate is being challenged as unconstitutional, according this month’s tracking poll from the Kaiser Family Foundation. (KHN is an editorially independent program of the foundation.) Opposition spikes to 80 percent when people are told the mandate “could mean that some people would be required to buy health insurance that they find too expensive or did not want.”

But opinions change when poll respondents are told that without the mandate, people might wait until they are seriously ill to obtain coverage, driving up insurance costs for everyone. Forty-seven percent support the mandate after being told this, while 45 percent oppose it. A larger plurality (49 percent) backs the mandate when told that without it, insurers could refuse to cover sick people and when told people would be excused from having to buy insurance if the cost would “consume too large a share of their income.”

One pro-mandate argument tilts the public decisively in favor of  the individual mandate. Sixty-one percent of those surveyed support it when told most Americans would still get their coverage through their employers and thus wouldn’t be affected by the mandate.

Overall, the public remains ambivalent about the law, with 43 percent opposing it, 41 favoring it, and 17 percent undecided or refusing to answer. The poll’s margin of error was +/- 3 percent, and it was conducted from December 8 through December 13 among 1,212 adults.

Public Can Be Swayed On Health Law’s Mandate, Survey Finds