Just days before the requirement for most large employers to provide health insurance takes effect, a new poll finds the public easily swayed over arguments for and against the policy.

Six in 10 respondents to the monthly tracking poll from the Kaiser Family Foundation (Kaiser Health News is an editorially independent program of the foundation) said they generally favor the requirement that firms with more than 100 workers pay a fine if they do not offer workers coverage.

But minimal follow-up information can have a major effect on their viewpoint, the poll found.

For example, when people who support the “employer mandate” were told that employers might respond to the requirement by moving workers from full-time to part time, support dropped from 60 percent to 27 percent. And when people who disapprove of the policy were told that most large employers will not be affected because they already provide insurance, support surged to 76 percent.

Opinion also remains malleable about the requirement for most people to have health insurance – the so-called “individual mandate.”

It remains among the least popular aspects of the law – with just a 35 percent approval rating. But when people are told that the mandate doesn’t affect most Americans because they already have coverage through an employer, support jumps to 62 percent. Conversely, when supporters are told that the requirement means some people might have to purchase insurance “they find too expensive or don’t want,” opposition grows from 64 percent to 79 percent.

The poll also found that a year into full implementation, most Americans, and most of those without insurance, remain unaware about many of the health law’s major features.

Nearly four in 10 people say the law allows immigrants in the country illegally to get financial help to purchase insurance (it does not), and more than 40 percent say (incorrectly) that the law creates a government panel to make decisions about end-of-life care for Medicare recipients.

At the same time, only about 3 percent were able to correctly say what the fine will be in 2015 for lacking insurance (the greater of $325 or 2 percent of household income).  Among those without insurance, only 5 percent knew that the deadline for 2015 sign-ups is Feb. 15.

The poll was conducted between Dec. 2 and 9 among a nationally representative sample of 1,505 adults age 18 and over. The margin of error is plus or minus three percentage points for the full sample. 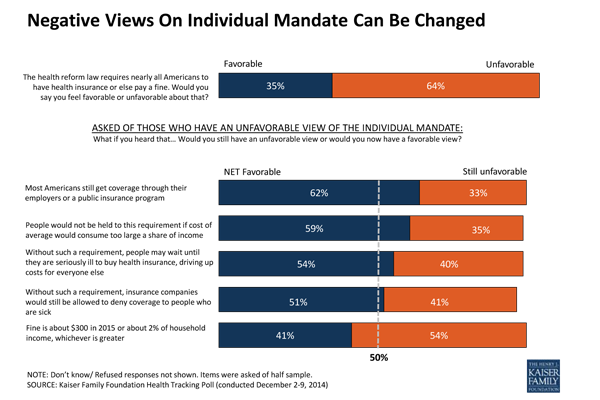