In a cavernous room just east of San Francisco, an army of phone operators fields calls from their customers. A large computer screen blinks the number of people on hold: two, and the average wait time: one minute, 12 seconds. 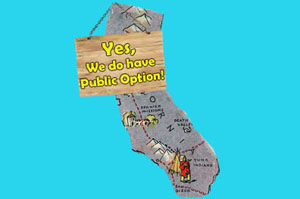 These phone operators working in a non-descript office park in Alameda are employed by a large health insurance plan, and they’re willing to go the extra mile for their customers. They’ll schedule a doctor to come to your home, a pharmacist to drop off a prescription, and they’ll even help you fill out an application for food stamps.

“We do things for them that a traditional, commercial health plan doesn’t do,” says Ingrid Lamirault, chief executive officer of the Alameda Alliance for Health, a county-run, not-for-profit insurer.

The much celebrated, and much maligned, public option may have died in Congress, but it’s alive and well in California.

Unique in the nation for having public health insurance plans that are run by counties, California has plans that stretch from San Francisco to the Mexican border and cover 2.5 million residents.

Listen to audio of the story

The alliance’s CEO Lamirault doesn’t plan on stopping there.

In 2014, under the federal health overhaul law, millions of Americans will be able to buy coverage through state-based insurance exchanges. In California, government-run public plans, like the Alameda Alliance for Health, will go head-to-head with private insurance companies to compete for all those new customers, and those who run the county plans believe they can offer a robust network of doctors and hospitals to bargain shoppers looking for low-cost coverage.

“I think when some people get to make a choice,” says Lamirault, “having local offices they can walk into and get help with things and get their questions answered, and when they call customer service they get their calls answered in under two minutes. Those kinds of things are important to them.”

Throughout California, county plan members largely go to public health clinics and county hospitals. But many counties also contract with private physicians and top-notch research hospitals. They even share the same lobbying group as the big-named insurance companies, the California Association of Health Plans.

Some of those companies don’t have a lot of love for their public brethren. “Certainly, there are some health plans that didn’t like the idea of having to compete with these public plans,” says Anthony Wright, a public plan booster and executive director of Health Access, a Sacramento-based health care consumer advocacy group. “Especially ones that, having come out of the Medicaid program, are used to providing care at cheaper rate.”

A Continuum Of Care?

In 2010, when California became the first state in the nation to pass legislation establishing an insurance exchange under the Affordable Care Act, Anthem Blue Cross tried to bar public plans from the new marketplace. In a letter to state lawmakers, the company said Congress soundly rejected the notion that the government should sell coverage in the private market, and California should not follow suit.

Wright, and others, argued successfully that almost half of those expected to buy insurance through the exchange are likely to be low- and moderate-income consumers, and many of them may have, at one point, been on Medicaid or another government-sponsored health program. “Some of these folks who are close to the poverty line may have already been in these public plans previously,” says Wright. “And so it made sense that this might actually be a good environment for them, to be an option and for people to continue their care with them even as they move up the income ladder.”

As the public plans try to attract new customers, one of their biggest advantages may simply be disgust among some consumers with well-known health insurance brands.

“I think insurance companies have made a bad name for themselves, deservedly so,” says Kim Burke, an art school teacher in San Francisco, who was turned down for coverage by private insurers because of pre-existing medical conditions.

For the last several years, Burke has paid a low-monthly premium for coverage in San Francisco’s public health plan. She says when the exchange opens in 2014, she’ll hold on to her public plan–and her grudge.
“I applied to four different insurance companies, all of which denied me for pre-existing conditions,” says Burke. “So I’m not really too keen on purchasing their product since they already denied me care when I really wanted it.”

For many health insurance customers, though, the ultimate selling point may simply be who has the cheapest product.

Insurance companies in California say they will happily compete on price so long as the public plans do not get preferential treatment. Today, doctors and hospitals accept low reimbursement rates from public plans, in many cases as part of their charity care. That allows the public plans to keep their premiums low, but private plans say they are charged higher prices.

The preferential treatment is not likely to last into the new world of insurance exchanges. When the exchange opens in 2014 in California to people with higher incomes, the government-run plans will have to pay providers more than they do now, says Sumi Sousa, officer of policy development at the San Francisco Health Plan.

Sousa says the utopian belief that public plans always cost less just doesn’t pencil out. “Some commercial providers, because they’re so large, they’re able to spread their cost over a much broader network,” says Sousa. That’s not the case for many county-run health plans in California, which tend to be quite small.
Still, says Sousa, the public plans do have low overhead: Executives like her earn a fraction of the salary paid to the big CEOs, and they don’t have stockholders.

The Public Option Did Not Die