Most Americans are willing to accept some level of cuts in Medicare spending to keep the program financially sound or to ease the federal budget deficit, but they still balk at major reductions, according to a new survey released Thursday. The poll results show that public opinion on Medicare cuts remains malleable, subject to influence by different arguments and factual assertions.

Forty-two percent of those polled would support minor cuts in Medicare to keep it from “going bankrupt,” according to the poll from the Kaiser Family Foundation. (KHN is an editorially-independent program of the foundation.) Another 32 percent would back major cuts. Only 21 percent opposed any cuts at all. 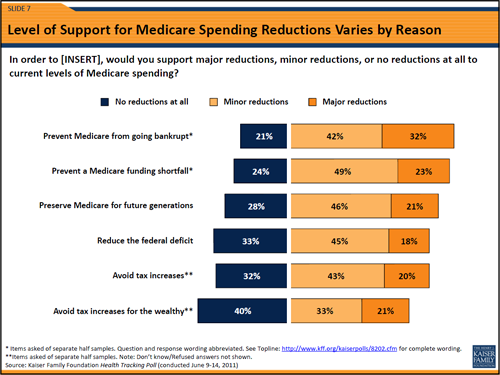 Support for major Medicare cuts for the purpose of lowering the federal deficit was weaker, at 18 percent, but 45 percent supported minor reductions for this purpose. A majority even backed spending cuts in Medicare to avoid tax increases for the wealthy.

The poll once again found the public split over the Republican House plan to change Medicare into a “premium support” or voucher program. Most seniors, however, remain opposed to that plan, under which Medicare would pay a fixed amount of money for medical insurance for the elderly.

The pollsters tested both Republican and Democratic talking points to see how they fared, and found each side has the potential to sway the public with their arguments. According to the poll, people were more likely to support the House plan when they were told “private plans will compete for seniors’ business and seniors will be able to choose plans based on cost and quality.” They were also more likely to accept the plan when they were told it wouldn’t kick in for people already over 55.

But support dropped for the plan when the public was told the House plan would increase costs for the elderly, eliminate “Medicare as we know it” or put insurance companies in charge of coverage decisions–three Democratic criticisms of the GOP plan.

On deficit reduction, the poll found the public more in line with Republican support for spending cuts over tax increases. Forty-seven percent of respondents favored mainly cutting spending, while only 21 percent backed a combination of spending cuts and tax increases. Just 16 percent thought deficit reduction should be achieved primarily through tax hikes, and 11 percent wanted to hold off on changes at this time.

The survey was conducted June 9 through June 14 and sampled 1,203 adults. It has a margin of error of +/- 3 percentage points.