By 12:03, many conservative lawmakers and television commentators who had been in the packed chambers stood on the marble steps outside, saying the health insurance mandate at the heart of the law appeared to be in deep trouble. 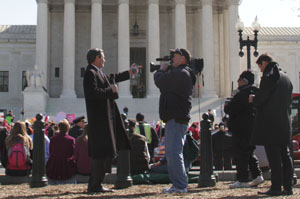 “You could just read their body language that they were sympathetic to our argument that the mandate exceeds federal powers,” said Utah Republican Sen. Mike Lee, a member of the Senate Tea Party Caucus.

Many listeners cited comments by Chief Justice John Roberts and Justice Anthony Kennedy, who raised repeated questions about whether the government could force people to buy health insurance.

Kennedy’s comment that such a mandate “changes the relationship of the federal government to the individual in the very fundamental way” was repeated over and over Tuesday.

CNN legal analyst Jeffrey Toobin described the government’s case as  a “train wreck.” He said Solicitor General Donald Verrilli Jr. appeared nervous and was unable to respond clearly to conservative judges’ assertions that Congress did not have the authority to require most Americans buy insurance.

Rep. Sander Levin, D-Mich., looked glum walking outside the court, but he rejected claims that the Obama administration failed to make its case with the justices. “I don’t think it was a train wreck,” he said, walking away.

While Lee said he was more confident the court would rule against the mandate, he said he was not ready to declare victory.

About 400 protestors were gathered outside the court, about twice as many as on Monday. Supporters outnumbered protestors by about three to one.

S.C. Attorney General Alan Wilson, a Republican, said he felt more confident the mandate would be struck down after listening to two hours of questions and comments from the justices. “The comment from the chief justice seemed to say once we allow this mandate, then the federal government is free to do anything,” he said.

Randy Barnett, a libertarian who teaches law at Georgetown University who has written reports for the conservative Heritage Foundation, predicted that whichever way the court rules, the decision would be a narrow one. “We have four members of the court going one way and four members going the other way. Those who have been saying this is going to be an 8-to-1, or a 7-to-2 decision have clearly been refuted,” he said.