Arkansas Gov. Mike Beebe, a Democrat, sat down in his office in Little Rock recently to talk with Kaiser Health News correspondent Phil Galewitz about his state’s experiment expanding Medicaid using a so-called “private option” strategy. Arkansas won federal approval last fall to use federal funding for the health law’s Medicaid expansion to purchase private insurance for newly eligible residents. Its Republican-controlled state legislature passed the plan last year, but must do so again during this session, which starts Monday, to ensure the program’s continuation beyond June 30. That is expected to be an uphill battle. Beebe’s remarks have been edited for brevity and clarity.

KHN: Why is the private option a better deal for Arkansas than traditional Medicaid or Medicaid managed care? 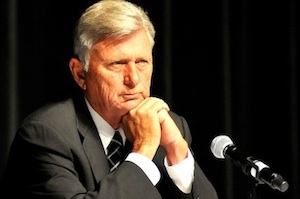 Gov. Mike Beebe says there are a multitude of reasons Arkansas legislators should vote to fund Arkansas’ private option plan (Photo by Keith Ingram via Flickr).

BEEBE: There are a lot of reasons. First of all, to the extent this creates a bigger community for our private insurance carriers to go along with other communities covered by the Affordable Care Act, it further broadens the base [of individuals covered through the online marketplace]. Secondly, there is concern among a lot of states about how they can handle the uptake on Medicaid expansion [when they have to begin paying some of the costs starting in 2017].  In Arkansas, we have a premium tax on all health insurance policies so we have a fund to defray those costs without increasing taxes. Thirdly, there is a natural tendency by the Republican side of the aisle to prefer private-sector involvement to a greater degree than pure Medicaid expansion. So politically and philosophically, that has a lot of appeal for some. The combination of all those things lends itself to this approach.

KHN: How difficult was it to pass the expansion last year?

BEEBE: It’s been pointed out we have a Republican legislature, but that is the least of our concerns. It is the 75 percent [approval] requirement under our Constitution for appropriating any money, which creates a huge obstacle. Getting 75 percent approval under any situation is difficult and to get 75 percent of votes in either house is a monumental task.  That is more significant, and consequently more of a threat going forward than partisan Republican–Democrat philosophy issues because it was passed with a majority of Democrats and majority of Republicans.

KHN: As you try to get private option Medicaid reaffirmed by the Legislature, are you facing largely ideological opposition?

BEEBE: It’s ideology versus pragmatism. What I try to tell everybody— and it works for some and doesn’t work for some —is that you can hate the Affordable Care Act all you want, but we can’t change that in Little Rock, Ark. If you want that changed, it has to be in Washington, D.C.  So set that aside. What is your obligation to the people you represent, to the people of Arkansas and how do you make the best of the situation? I tell them they are going to pay for this whether they like it or not. I use a simple analogy: We pay about 18.5 cents per gallon for a federal gas tax every time we pump gas and that money goes to Washington and is distributed through a formula back to the states. … Not addressing this would be like telling the federal government, ‘Don’t send us any highway funding. Send our money to California and New York to help them pay for their roads.’ … Our hospitals and businesses are going to pay for this whether we take our share or not, and we are not going to change Washington by not taking our share.

KHN: Will you use any different strategies this year to get the private option extended?

BEEBE: Yes, there are competing strategies that lend themselves to competing interests. It’s a tenuous situation. Let’s talk negatives first. If we lose one or two votes, it’s critical because of the 75 percent requirement. There are people concerned with the politics. That is the negative side.

On the positive side, there are a couple of reasons why it would lend itself to continuation and even greater support. Some people did not trust the federal government and that we would …get the waiver and did not want to vote for something that Washington was not going to follow through on. We’ve seen that Washington did precisely what we asked them to do … So whatever reluctance people had for that reason should be satisfied.

Secondly, there is a more practical reason: In Arkansas, we estimated that between $80 million and $90 million in savings to state general tax revenues would be afforded our people as a result of the private option. That is from a reduction in what we have to pay to various entities for uncompensated care and the smaller but real Medicaid population that could be moved from traditional Medicaid with a 30 percent state share [of costs] to a zero percent state share … The legislature wanted to pass [those savings] onto its citizens so they passed tax cuts. … Well, if you don’t continue the private option, you still have the tax cuts and you are left with an $80 to $90 million hole in the budget. So that lends itself to continuation.

KHN:  How disappointing would it be if the Legislature fails to continue the program?

BEEBE: Terribly, terribly disappointing, particularly since the rest of the states that are so opposed to Obamacare and so vociferous in their support for repealing it have recognized the sheer math of the need to do something akin to what we have done. The governor of Utah has indicated he wants to follow the Arkansas model. We have seen Iowa, Michigan adopt various forms [of the Arkansas model]. Ohio and Pennsylvania are talking about it. So we have a lot of states predisposed against everything associated with the Affordable Care Act that have come to the realization that they are going to pay for it if they take it or not, and that they need to make best of it. .. It would be tragic for Arkansans —not only those covered, but the businesses adversely affected by penalties, the hospitals adversely affected by Medicare reimbursement cuts and the general budget at large.

KHN: So do you think other reluctant states might adopt the private option model to move forward with Medicaid expansion?

BEEBE: Yes. I think we already are seeing that interest from other states reluctant to embrace any expansion. That is evidence that we are the tip of the spear, causing folks to think through ideological differences, to get to pragmatic solutions.

KHN: Does anyone lose as a result of the private option? Is anyone at risk from it?

BEEBE: I don’t think so. Potentially the federal government may have to pay a little bit more, but we calculated that we are within the parameters.

KHN: As governor, you have repeatedly said your top two priorities are education and economic development, but it seems in the past year, health care has dominated your time.

BEEBE: If you get education and economic development right, it’s easier to solve health care issues or social justice or criminal justice issues. If you have an educated workforce that is gainfully employed in well-paying jobs, then all other issues, including but not limited to health care, are more easily attacked because [people] have money and knowledge and lifestyles that cause [them] to make better decisions.