The prospect of the Supreme Court striking down the entire health law or some of its key elements has many people in Washington abuzz about what happens next. What about the federal grants that have been awarded as part of the law’s implementation?  Does the shrinking “doughnut hole” in seniors’ drug coverage grow again? Would consumers lose their protection against out-of-pocket costs for preventive services? 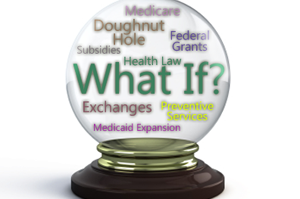 Consumers, states and the federal government have much to win – or lose – depending on how the court rules.  Proponents say the subsidies for eligible lower income people, health insurance exchanges and Medicaid expansion, among other provisions, are examples of how the law will save consumers money and improve access to care. But critics want to reduce the billions of dollars in federal spending in the law as the nation wrestles with a massive deficit. If the court strikes the law—or even a portion of it—experts say it is not clear how these economic issues will play out.

There are few roadmaps or precedents to help guide policy makers and politicians.

“This case more directly affects the national economy and touches more Americans  in their day to day lives than anything the Supreme Court has done in almost a century,” said Tom Goldstein, a Washington lawyer and publisher of SCOTUSblog, which follows the Supreme Court. “This is right at the root of very basic questions of economic power and health care in the country. There aren’t other similar disputes that have reached the justices since the New Deal.”

Since there is little common ground between the Democrats and Republicans on the law, if it were struck down or altered significantly by the court, it would likely be extremely difficult to build a bipartisan consensus on legislation to tidy up the confusion or remedy the pocketbook issues.

“It’s just too contentious,” says Joseph Antos, a health care expert at the American Enterprise Institute, a conservative think tank. “Even next year, it’s really hard to imagine you’d get corrective legislation because the enmity between the two sides will be just as strong as it ever was.”

There would likely be differences of opinions about how the federal and state governments would proceed in closing their books on the law. If the Supreme Court and Congress give states no marching orders, it might again fall to the courts to settle bills and loose ends. The Supreme Court could kick some decisions – perhaps on the fate of grants already issued to states and others – to lower courts to decide.

Goldstein doubts that the justices will weigh in on issues like what happens to federal grants that have already been distributed or the law’s payment cuts to hospitals and other Medicare providers. “That’s too in the weeds,” he said.

“It will be a partly political, partly legal question. I’m sure that if the entire law gets struck or at least the parts of the law that relate to the grants, the government’s going to want back the unspent portion of the funds,” Goldstein said. “A lot of details will depend on how the grants were written and those sorts of things.”

The Department of Health and Human Services might try to fix some problems through rule making, he added.

Here’s a look at a few of the major economic questions that could quickly arise if the court strikes all or parts of the law:

–Will the federal government try to recover the money it has spent implementing the law?

If the whole law is tossed out, at some point the federal government may try to collect the grants it issued to states and others to fund the creation of health insurance marketplaces, called exchanges; prevention activities and programs to make health care more efficient, he says. “If the whole thing really is unconstitutional, that has to mean that it is illegal to spend the money that way under current law,” said Antos.

Retrieving unspent funds might be possible, but collecting money that’s already been spent could prove problematic, especially for cash-strapped states still dealing with a weak economy.

“My sense would be they would not recover the money. How do you recover the money? If it’s spent, what do you do?” said Steven Lieberman, the president of Lieberman Consulting Inc. and the former deputy executive director for policy at the National Governors Association.

–Would states continue their efforts to establish insurance marketplaces?

The health law creates state exchanges where eligible individuals and small businesses could purchase health insurance. If the entire law is struck down, some states, such as California and Maryland, are expected to continue their efforts.

But if the ruling prohibited additional federal funding for implementation of the health law, states wanting to build exchanges would have to do so with existing federal grants or with state funds. Federal subsidies in the law to help people buy coverage in the exchanges could also be gone, depending on the court ruling. If that happens, consumers would have to pay more from their own pockets for coverage.

–What about consumer benefits?

Several provisions of the law are geared to guaranteeing low-cost care, such as mandates that some preventive services be provided to beneficiaries with no out-of-pocket costs. Favoring a market-based approach, the GOP would prefer that insurers decide themselves to keep health law consumer protections in place without Washington demanding it happen.  And some companies are doing just that.

UnitedHealthcare, which covers about 26 million people in plans that could be affected by the regulations, said June 11 it would continue to offer cancer screenings and other preventive services without a copayment, as well as allow young adult children to stay on their parents’ policies up to age 26 and  not reinstate lifetime limits on coverage.

Hours later, insurers Aetna and Humana said they too would continue with some of those provisions. But other key safeguards, such as guaranteed coverage for people with medical problems, have not been addressed by the insurers.

Another area of uncertainty, is what happens to the rebates that insurers are required to pay consumers if health plans fail to spend at least 80 percent of premiums on medical care. An estimated $1.1 billion in rebates would be paid by Aug. 1 under current law, according to the Department of Health and Human Services. If the entire law is struck down, it’s not clear if insurers would have to pay the rebates.

–Would the consumer savings in the Medicare prescription drug program remain?

Industry officials say a court rebuff could put seniors in jeopardy of once again having to pay full price for brand-name drugs after they reach the coverage gap in their prescription drug plans. If the entire statute is struck down, the legal structures that allowed pharmaceutical manufacturers to cut brand-name drug prices in half when Medicare beneficiaries hit that coverage gap — known as the “doughnut hole” — would be eliminated, according to Matthew Bennett, a spokesman for the Pharmaceutical Research and Manufacturers of America. That would raise questions about whether this program could continue, he said.

Questions Abound About The Pocketbook Effect Of A Court Decision