Uninsured for more than five years, Leslie Peters says she was “chompin’ at the bit” to get coverage to afford regular medical care that she often has gone without.

That’s why as soon as HealthSource RI, the Rhode Island online health insurance exchange, went live  Tuesday, she enrolled. “I was so excited,” said Peters, who lives in Tiverton, R.I. 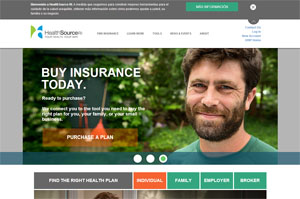 She chose a “gold” tier Blue Cross and Blue Shield of Rhode Island plan that would have the lowest co-pays and deductibles. Her monthly premium will be $217 a month, including the federal subsidy she received based on her projected $19,000 annual income for 2014.

Rhode Island is one of 14 states enrolling people into its own Affordable Care Act exchange. The other states are relying on the federal exchange at healthcare.gov.

Peters is one of 252 people who have applied for coverage as of noon Wednesday, exchanges officials say.

Peters said she found the enrollment process easy. “I was really pleasantly surprised,” she said. Peters had two companies and 11 health plans to choose from on the site. She said it took her 15 minutes to fill out information on the HealthSource web site, though she needed more time on the insurer’s web site to examine what doctors and hospitals were in the health plan networks.

Despite reports about health plans offering few doctors and hospitals, she said the plan she selected had a wide range of providers, including the ones she needed.

Peters, who had a long career in radio, lost her consulting job five years ago and was unable to find new coverage because of pre-existing conditions including food allergies and previously having taken anti-depressants.

She paid her premium by providing her checking account information to the exchange, and can track the status of her enrollment on the portal.

Without coverage for several years, Peters said she only sought care at a local clinic when she had to and avoided preventive services such as mammogram.

“It feels great to know I will soon have insurance and not have to worry about this anymore,” she said. “Not having insurance is something I worried about all the time.”

R.I. Woman Among First To Enroll In Obamacare Exchange