The percentage of babies born prematurely fell to 11.4 percent in 2013, its lowest level in 17 years, according to an annual March of Dimes report released this week. While many factors contributed to the decline, officials say the health law’s expansion of Medicaid to adults with incomes up to 138 percent of the federal poverty level has played a role. 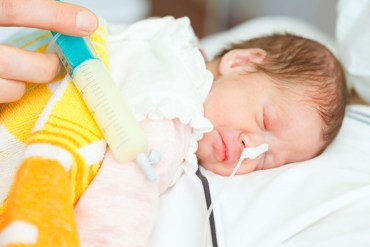 “This decline can’t be attributed to the marketplaces, which haven’t even had a full year of enrollment yet,” says Cynthia Pellegrini, senior vice president for public policy and government affairs at the March of Dimes. “But there were places that did the Medicaid expansion earlier,” after the law passed in 2010.

So far, 27 states and the District of Columbia have decided to expand their state Medicaid programs to adults as permitted under the health law.

The report card measures states’ preterm birth rates against the March of Dimes’ 9.6 percent goal and assigns letter grades. This year, grades for 27 states improved from the previous year. The United States’ 11.4 percent rate earned it a “C” grade.

Preterm birth is the number one cause of death in newborns. In 2013, more than 450,000 babies were born prematurely.

The report card tracks states’ progress in implementing strategies that reduce the risk of preterm birth. In 2013, 30 states and the District of Columbia reduced the percentage of women of childbearing age who were uninsured. The percentage of younger women who smoke fell in 34 states and the District, and the late preterm birth rate, meaning babies born between 34 and 36 weeks gestation, came down in 30 states.

The health law’s expansion of public and private health insurance coverage to millions of women will likely have the largest impact on reducing preterm births, says Adam Sonfield, a senior public policy associate at the Guttmacher Institute, a reproductive health research and education organization. Pregnant women who meet their state’s income eligibility standards (typically at or near 200 percent of the federal poverty level, or $23,340), can receive Medicaid services until 60 days after they give birth, but more consistent coverage helps ensure that women are healthy before they become pregnant and that they receive early prenatal care.

Other health law provisions will make inroads as well, according to Sonfield, who authored a Guttmacher brief on pregnancy-related services shortly after the law passed in 2010. Maternity and newborn care is now required coverage in plans sold on the individual and small group markets. A range of preventive services must be provided free of charge to pregnant women, including folic acid supplements, smoking cessation counseling, screening for gestational diabetes and prenatal care.