Letters to the Editor is a periodic Kaiser Health News feature. KHN welcomes all comments and will publish a selection. We edit for length and clarity and require full names.

Finding The Right Balance On Vitamins

Just had to point out the humor in your article “Older Americans Are Hooked On Vitamins Despite Scarce Evidence They Work” (April 4). Older Americans are the evidence. They live longer, yes? What other proof would you like? The greatest harm to us is not in vitamins, but in the amount of chemicals in our foods and bioengineering of its structure. Vitamin supplements help undo the damage that GMO/GE cardboard food does in undermining health. If you were truly interested in our health, you would investigate the chemicals choking our air and poisoning our water and lands.

Exactly. Get your vitamins and minerals through food first. There is insufficient evidence to support vitamin & mineral megadoses/supplements when the individual is not deficient in said vitamin/mineral. https://t.co/2CvisPHyy2 via @khnews

It would have been more instructive for Liz Szabo’s article on the use of vitamin supplements to clearly differentiate between vitamins and herbal medications. Most people tend to think of the word “vitamin” as including minerals and herbs. Several studies support the use of certain herbs and spices in the treatment of various afflictions. Among those that immediately come to mind: turmeric curcumin, boswellia extract, and glucosamine (crystalline form). It is true that several studies show no improvement in joint symptoms with the use of glucosamine, but these studies do not use the crystalline form of the substance.

Imagine if the time and money spent on supplements were spent on healthier food instead? #NovelIdea

As a Canadian, I love our health system. When I listen to NPR/Kaiser Health News stories, I am always blown away by how backward the U.S. system seems. One criticism of the Canadian system that I hear on U.S. news is about “wait times in Canada.” My wife has had two hip replacements and two knee replacements, and this was never an issue for us. A few months ago, on a trip to the States, I met a woman who was saving for a knee replacement. It struck me: That was essentially “a wait time.” The takeaway — you have “wait times” in the U.S., too. They are just downloaded to the patient, so they never show up in statistics.

‘Pre$cription For Power’ — Or Partnership? 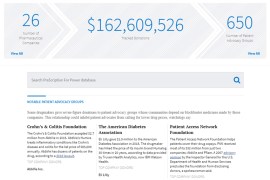 Investigating the relationships between patient advocacy groups and Big Pharma

Patients deserve to have a voice and are definitely OK with advocacy organizations receiving donations from pharma companies who support their causes (“Patient Advocacy Groups Take In Millions From Drugmakers. Is There A Payback?” April 6). If we didn’t have them, then no one would listen.

Do you have any idea how many Facebook groups there are because of hellacious diseases and conditions? Patients have written emails, letters, made phone calls and created petitions but get ignored by lawmakers.

The chronic pain community, for one, has been hit hard with discrimination. Many legitimate pain patients have been cut off from or forced to cut back on their stable medications. These patients are not addicts, but are treated that way, like second-class citizens. Thank God for pharma donations to get their voices out there. Pain patients didn’t ask for any disease or accident or failed surgery to ruin their lives, but they must live with it. Sadly, the suicide rate is climbing because of persistent pain.

Patient advocacy groups are grateful for any help. The real problem is there are too many databases. Our privacy is constantly being invaded!

I’m all for transparency as long as we aren’t trying to shame patient groups for accepting financial support to achieve their missions.

I worked in [the pharmaceutical industry] for 10 years at AstraZeneca. We did work with patient advocacy groups and fund them, but I can confidently say the money gave us the opportunity to understand the patient perspective and the diseases we were treating. We respected the line between influence and access to thought leaders.

Your article on the relationship between pharmaceutical companies and patient advocacy organizations is misleading. It implies some sort of “corruption” — nothing could be further from the truth. These groups cannot be bought and stake their reputations on it, as did we.

Where we shared a common goal (good patient outcomes), we worked together, for mutual understanding and learned a lot in the process, like designing trials to be patient-friendly, to understand patient perceptions, to ensure open and fair access to medications (when formularies restricted use to drugs, as in mental health).

Most of the larger, well-established groups have strict policies in place to ensure no undue influence. They were trusted partners. I cherish the work we did together. It was open and honest, not corrupt.

If the argument is that patient advocacy spending is a surrogate form of lobbying, I’m not seeing much of a correlation here. Also note that there are good reasons why pharma companies should be working with patient groups, they’re the ultimate customers

No Shortage Of Blame In Opioid Painkiller Crisis

What usually gets left out of stories about opioid abuse (“The Other Opioid Crisis: Hospital Shortages Lead To Patient Pain, Medical Errors,” March 16) are the stories of people who are in chronic pain and need the medication to be able to work a job, drive a vehicle without passing out from pain, take care of families, sleep without pain — essentially live a somewhat normal life.

I recently was diagnosed with degenerative disk disease and fibromyalgia. I have never been in so much pain in my life, and I am not nearly the only one. Still, Attorney General Jeff Sessions advised in February that chronic pain sufferers should “take some aspirin” and “tough it out” —the arrogance and ignorance of that statement is mind-blowing. Obviously, he or those close to him have never been affected by chronic pain. We do not have a loud voice because the people who struggle with addiction are dying.

Those with addictions will continue to get their drug of choice, while we who live daily with chronic pain will fall by the wayside. Please be a voice for the silent.

Cost and Quality Pharmaceuticals Letter To The Editor