What doesn’t kill you only makes you a repeat customer.

So says Prescott Pharmaceuticals, fictional and macabre sponsor of The Colbert Report.

But it’s no joke to the health care system. Repeat customers in hospitals are seen as a big problem – not to the hospitals themselves, which can profit from some patients’ frequent visits, but to the entities that pay for the care: Medicare, Medicaid and private insurers.

The U.S. Department of Health and Human Services, especially, is taking hospitals’ repeat customers very seriously. Almost one out of five Medicare patients discharged from a hospital is back within 30 days. Research suggests as many as 75 percent of those return visits could be prevented with better treatment in the hospital and better care once people are back home.

As with many other problems in the health-care system, unnecessary hospital readmissions are associated with worse treatment and health outcomes, as well as higher costs to taxpayers – $15 billion a year for Medicare alone, according to a Medicare Payment Advisory Commission study.

Starting next fall, HHS will begin penalizing hospitals if their readmission rates are higher than expected for three conditions: heart attacks, heart failure and pneumonia. In the first year that penalties kick in, one percent of hospitals’ Medicare payments will be withheld, and that penalty will climb in subsequent years – at a time when payers are reducing fees to hospitals on a number of other fronts, too.

On a recent weekday, Josuely Claudio visited a clinic at Mt. Sinai Hospital on Manhattan’s Upper East Side that targets patients with complicated, chronic health problems who come in way too often. The 53-year-old had a triple bypass operation in 2003, eventually received nine stents, and had to retire from his decades-long career as a hospital technician by 2006. He has congestive heart failure – basically, a very, very weak heart – plus diabetes and severe gastroparesis, a stomach problem that makes him gag constantly. 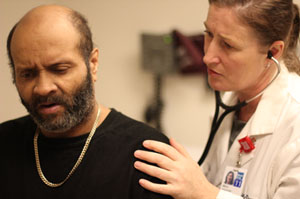 Claudio was inconsistent about taking insulin and various medications, keeping doctors’ appointments and maintaining a healthy diet. So when Mt. Sinai created its Preventing Admissions Care Team, or PACT, last year, he was a natural candidate. He joined in late 2010 and has made biweekly visits to the clinic, where he primarily meets with a social worker and nurse practitioner, and occasionally sees a doctor.  The idea of this “transitional care” is to make patients more self-sufficient, so they can get the care they need outside the hospital, prevent problems from recurring and not go to the emergency room every time there’s an episode that can be handled at home.

Mt. Sinai has one of the worst records in the country for readmitting patients with Claudio’s condition, heart failure. Hospital administrator Claudia Colgan challenges how the federal data is gathered — she says the payment adjustment for hospitals serving poor and less healthy patients doesn’t go far enough — but she said that getting readmissions down is a top priority. She says it will take a major culture shift.

“It’s the default posture to admit patients,” Colgan said. “If you are the doctor that’s on call, and a patient you have never met before calls and says, ‘I have these symptoms,’ the likelihood is you’re going to say, ‘You know what – go to the emergency room.’ And what we’ve tried to do is not have that happen.”

Historically, readmissions have been very good to Mt. Sinai — and to many hospitals.

Sure, paying for avoidable care might be bad, if you’re the government or a private insurance company, and you’re the one writing the checks for doctors, nurses and hospital beds. But for those being paid, repeat customers like Claudio are money in the bank. Dr. Eric Coleman, from the University of Colorado, says for too long hospitals have benefited from a system that rewards them for excessive care.

“There are conflicting incentives,” said Dr. Coleman, who has developed a transitional care program that is one of the inspirations for PACT.  “Depending on what part of the country you’re in, a hospital might rely on readmissions accounting for between 15 and 25 percent of their revenue.”

Next fall, when the Medicare fines kick in, if Mt. Sinai’s readmission rate triggers the penalty, the hospital could lose an estimated $2 million to $4 million – and even more if the problem persists. There’s another catch, too. Mt. Sinai administrator Colgan says hospitals are being asked to spend more on patients – often for problems that occur out in the community, not at the hospital – at the same time they’ll be seeing “downstream revenue” decreased, as admissions are prevented.

There are some signs it’s paying off medically, if not economically. In the program’s first full year, its 500 patients have had a 40 percent drop in readmissions and a 55 percent drop in emergency room visits.

Claudio’s health has improved only modestly, but he says the counseling has helped his peace of mind improve dramatically. One recent evening, when he couldn’t even keep water down and was feeling dehydrated, he didn’t dial 911, as he might have before. He’s learned to gauge his symptoms and control his anxiety better. This time, he lay down, went to sleep and waited for the PACT clinic to open on Monday to call.

“I feel more at ease, because I have them,” Claudio said of the PACT team. “I try not to panic, and if it gets worse, I’ll call them, and they will tell me to come here and maybe I just need the fluids, so I don’t have to go to the emergency room.”

Mt. Sinai is absorbing almost all of the costs of those twice-a-week clinic visits. The PACT program this year will cost the hospital about $1 million. Colgan and others would like to expand it – to treat more patients, bring in mental health professionals, and maybe extend clinic hours or provide overnight on-call coverage.

But Colgan said that would probably require outside help, or a little more leeway on penalties – perhaps sharing some of the savings Medicare would enjoy from reduced admissions.

In the meantime, it’s not clear how long Mt. Sinai can foot so much of the bill for PACT, Colgan said, when “the only return on investment is avoiding the penalty.”

Hospitals Try To Control Readmissions, Even When It Hurts Profits