If a Medicare staff recommendation is approved, health insurance exchanges may be up for a rebranding.

“We are recommending not using the word ‘exchange’” in enrollment materials, Julie Bataille, director of the CMS Office of Communications, said last week at a meeting of outreach advisers. And while she didn’t mention the preferred substitute, she dropped hints.

“Words like ‘marketplace’ resonate much more with the consumer and also tend to be something that is all inclusive,” she added. 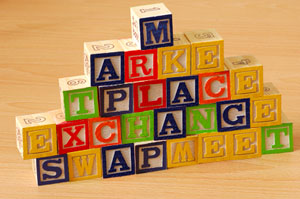 Later, during a break in the meeting, Bataille mentioned that “exchange” can have a number of different meanings to consumers, including the idea that they may have to swap something.

The health law requires the federal government to establish health insurance exchanges in states that don’t create their own. They are often described as an online marketplace similar to Travelocity.com or Amazon.com, where consumers will be able to search for insurance policies that fit selected criteria.

Enrollment information will be available in the fall of 2013 and the exchanges — or whatever they may be called — are to begin operations in 2014, unless the Supreme Court overturns the law.

The word “exchange” appears 247 times in the health care law and “marketplace” not once, according to a Kaiser Health News text search. But that doesn’t mean officials are obligated to use it, said Brenda Cude, a professor of consumer economics at the University of Georgia, and a consumer representative for the National Association of Insurance Commissioners.

“I don’t believe that Congress is any kind of expert on how to communicate with consumers,” she said.

But “marketplace” may not be a fool-proof alternative, said Cude. She worries that comparing a health insurance exchange to a shopping website encourages the notion that the lowest price policy is the best choice. That may be true when looking for a commodity like a cheap airfare to a single destination, but not for health policies offering different benefits, she said.

Bataille said the Medicare staff’s advice to avoid the term “exchange” is supported by external research and the agency’s focus group testing this year in Cleveland, Dallas, Miami, Philadelphia and Phoenix. Sessions were also conducted in Spanish in Houston and New York.

CMS “routinely” tests its materials and websites with consumers “to make sure we are serving our beneficiaries as well as possible,” Bataille said in an email. “So we see our work on the exchanges as an extension of that.”

Bataille said CMS also would seek public comment on the enrollment materials before making a final decision on whether to use the word “exchange.”

What’s In A Name: Health Exchanges, Marketplaces … Or Swap Meets