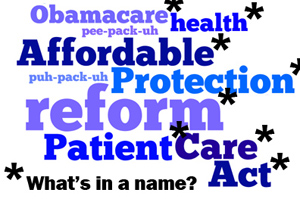 Puh-pack-uh? Is that some kind of llama?

But those less-than-inspiring monikers aren’t much help to Democrats trying to convince the public that “Obamacare” — the Republicans’ pejorative name for the law — is worth keeping, said Robert J. Blendon, a professor of health policy and political analysis at the Harvard School of Public Health.

Democratic pollsters concede that there is a problem.

“We do need a common narrative that includes a name,” said Celinda Lake, president of Lake Research Partners. “When Obama’s job performance improves, it will be fine to call it Obamacare. Now, it is polarizing.”

Names of legislation, he said, should “summarize something important for people to organize their thinking.”

Indeed, constructing catchy-sounding acronyms for legislation, as well as other things, is a long tradition on Capitol Hill.

In the early 1990s, Sen. John Chafee (R-R.I.) announced his health-care bill would be called the HEART Act. Asked by a reporter what HEART stood for, Chafee said he would figure it out later; the important thing was getting people to start using the warm-and-fuzzy acronym. In 1999, Sen. James M. Jeffords (R-Vt.) gave the Education and Labor Committee a new name — the Health, Education, Labor and Pensions Committee, or HELP.

Mellman agrees that there is a widespread view that costs are on the rise because of the law — even though supporters say that view is inaccurate.

“Members of Congress are hearing it right and left,” he said. “People’s premiums went up last year and [Democrats] said it had nothing to do with the bill. When they went up this year, people said, ‘Hah!’ and they linked it [to the law], even though there probably was no connection.”

A poll conducted by Rasmussen Reports during the first week of December found that the public is more than a little skeptical about costs. When Rasmussen asked people what will happen to the cost of their health care under the new law, 57 percent said it will rise. Only 17 percent said that their costs will go down, and 20 percent said they will stay about the same. Some pollsters caution that findings from Rasmussen surveys can be off because their interviews are automated.

Still, the results are fairly consistent with a CBS poll conducted just after President Obama signed the law; 52 percent of respondents said they believed their costs would increase, 14 percent predicted they would decrease, and 27 percent thought the law would have no effect on their costs.

So how, exactly, did the law end up with a handle like “puh-pack-uh”? Creators of the law did pay some attention to its name, Mellman said, but in the end, it was designed by committee. To satisfy more people, the name became long and inclusive, giving it less of a chance to catch on and be used, he added. And that opened the door to “puh-pack-uh,” health-care reform and the Affordable Care Act.

“This was a missed opportunity,” said Lake, noting that the name problem is symptomatic of a broader problem among Democrats on health-care overhaul.

“There wasn’t nearly enough branding of health-care reform,” she said. “Because of that, we paid the price throughout the whole debate.”

Rep. Michael C. Burgess (R-Tex.), who is pushing for repeal of the law, said that calling it the Affordable Care Act is a misnomer.

“I even had an amendment to strike the word affordable from the bill’s title, but I didn’t get anywhere with it,” he said.

As for “puh-pack-uh”? That, he said, “kind of reminds me of those people who invested heavily in those llama-like animals.”