There are 20 million Americans between 55 and 60. Nearly 1 million are unemployed, according to the Labor Department. Many more lack health coverage, suggests the Census Bureau’s new report on income, poverty and health insurance. Thanks to the lousy economy, the whole group is at higher risk for long-term health problems and earlier death, suggests new research from Wellesley College. 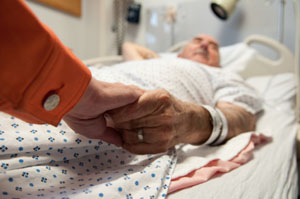 Wellesley economist Phillip B. Levine and colleagues mashed mortality and employment data over the past four decades to find what you might expect but what had never been measured on this scale: Experiencing an economic recession in your late 50s, on average, isn’t just bad for your wallet.

“Being unfortunate enough to experience a recession as an older worker has significant lifelong effects for one’s health,” Levine said in an interview.

Lack of income and health insurance are the presumed causes. The research is a newly published working paper at the National Bureau of Economic Research.

The risk disappears for slightly older people, the economists found. Folks who were 62 or older when recessions and high unemployment hit showed survival rates little different from those who lived through a normal economy at that age. The theory: The Social Security program that kicks in at age 62 and the Medicare program that starts at 65 carried people through economic turbulence in ways that were unavailable to the slightly younger.

“It stresses the importance of Social Security to the well-being of the elderly,” Levine said. “If you hit a recession at 57, you have to figure out how you’re going to survive for the next several years. And that’s very difficult for a lot of people.”

Measured across the whole population of older workers, a recession’s effect on long-term health was subtle. If unemployment popped 5 percentage points while people were in their late 50s, their chances of living into their 70s fell by 0.0015 to 0.0020 percentage points, the economists found.

“Although these effects might appear to be incredibly small, it is important to interpret them within the context of the number of workers who lose their jobs during a recession, the number who may lose health insurance, and then the number of those whose health may be seriously affected as a result,” they wrote.

For example: In August there were 400,000 more unemployed Americans aged 55-59 than there were five years ago, according to the Labor Department.

Ironically, other research shows that recessions improve society-wide health in the short term. Less driving (fewer crashes) and less money to blow on alcohol are among the reasons. But for unemployed workers in their 50s, that’s probably small consolation.