Sitting at the kitchen table in her modest apartment, Jaya Laxchi Rai recounted her family’s journey: fleeing from ethnic persecution in Bhutan, living in a Nepali refugee camp and arriving in the U.S. almost two years ago. 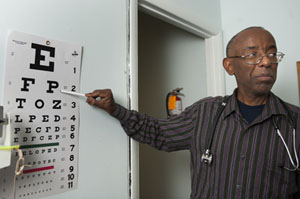 Dr. Ashenafi Waktola M.D. treats people at his clinic in Silver Spring, Md., where almost 50 percent of his patients are refugees (Photo by Vanessa Vick for Kaiser Health News).

The 70-year-old grandmother, clad in a simple cotton sari, remembered there was a doctor with them on the airplane, assigned by a resettlement agency, because her daughter-in-law had been chronically weak, and her grandson struggled with his breathing since living in the refugee camp.

But health care has not been as simple or readily available for the family of six after landing in the U.S. in September 2011 and settling into their apartment in suburban Maryland.  It rarely is for the 76,000 refugees admitted to the U.S. every year, most recently from countries like Iraq, Iran and Myanmar.

A refugee’s relationship with American health care can vary widely by community and circumstances, said Heather Burke, a domestic team leader at the committee on migrant and refugee health at the Centers for Disease Control and Prevention. Refugees might be resettled in a well-established community with neighbors from their home country, or they may reach a destination where the government caseworker who greets them at the airport is the only person they know to call.

With the enactment of the Refugee Act of 1980, refugees gained a different status than other new arrivals. Unlike immigrants, who do not qualify for federal health plans until they live in the country for at least five years, refugees are automatically enrolled in a medical benefits plan – usually Medicaid, the federal-state program for low-income citizens, or Refugee Medical Assistance. They are also assigned case workers from government-funded resettlement agencies, who help them navigate and understand the health care system. 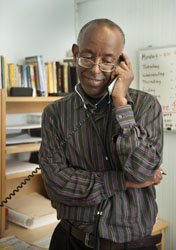 Many of Dr. Waktola’s patients are uninsured or work for minimum wage. He himself is a former refugee from Ethiopia (Photo by Vanessa Vick for Kaiser Health News).

After eight months, those covered through the Refugee Medical Assistance Program have to find another source of health coverage, while those on Medicaid may reapply for the program. About 61 percent of the refugees who find jobs receive employee health coverage, according to the federal Office of Refugee Resettlement. But the safety net and temporary support of a case worker doesn’t always shield refugees from problems caused by the complexities of the U.S. health care system. Chief among those problems is the language barrier.

“There’s a lot that can get lost in translation,” Burke said.

Communication problems recently snagged Megh Bir Rai, Jaya Laxchi’s 74-year-old husband, who has diabetes. Some months ago he visited the doctor to find that his initial health plan was no longer in effect. But without his case worker available to help him, Rai wasn’t sure how to handle the situation.

“My doctor said the check-up was $300, but there was no way I could afford that,” he said, speaking through an interpreter in the kitchen of the family’s sparsely furnished apartment in Riverdale, Md. Megh Rai went home that day without filling his new insulin prescription. He found out shortly after that he had to reapply for Supplemental Security Income, a benefits program for the elderly and disabled that would automatically qualify him for Medicaid. Refugees can access Medicaid benefits for at least seven years, and there is no time limit for those who naturalize as U.S. citizens.

Burke said gaps that refugees face in getting the proper treatment can often be addressed through “culturally competent” care. This can mean better translation services, community support, and doctors who are able to understand their unique needs after a past that could include trauma and torture.

Dr. Ashenafi Waktola, an internal medicine doctor, said his own experience as a refugee from Ethiopia helped shape his practice, based in Silver Spring, Md. Almost 50 percent of the patients at his Affordable Health Clinic are refugees. 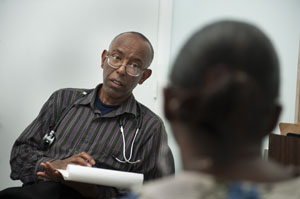 Waktola said the International Rescue Committee recently started sending him more refugee patients, partly because he speaks Amharic and understands Tigrina, two languages spoken in Ethiopia and Eritrea. And regardless of whether they are covered under an insurance plan or not, he said he will not turn a refugee away.

“Just because you’re in a safe place doesn’t mean you’re not frightened,” Waktola said of treating refugees. “But I want them to understand their choices in this system.”

To maintain affordable care, the physician said he keeps overhead costs low. All of the tables and patient beds in the clinic were second-hand or free, and only one other staff member, a receptionist, works in the office. Waktola said he and his wife also committed to a simple life in order to serve lower income patients – she does the billing from home, and he takes a bus to work.

When refugees come to his office, Waktola said he takes at least 30 minutes with each one, and tries to understand their mental health and lifestyle along with their physical health. Sometimes, he said, they have quietly suffered a traumatic, difficult life.

For the Rais, a difficult life is both recent and easy to remember. Jaya Laxchi and Megh Bir owned a farm in the Sanchi district of Bhutan, the mountainous country landlocked between China and India, until early 1990s. With armies marching through their village and one son taken into captivity, they fled to a refugee camp in the bordering country of Nepal.

After more than a decade in the camp, the Rais heard of an opportunity to go to the United States through United Nations High Commissioner for Refugees. It was, they thought, a road to education for the children and jobs for the adults. It was also their last resort; they couldn’t return to Bhutan.

This kind of forced displacement can make refugees particularly vulnerable to mental illness, Burke said. And their treatment is further complicated by distrust in pharmacies, doctors and a system that could be very different than what they were accustomed to back home.

“We could do a lot more to understand the challenges they go through,” Burke said. “And for them to understand how our system works would go a long way.”

Waktola said that when it came to issues like mental health or preventive treatment, refugees are often less inclined to get the care they need than with acute, immediate health issues. Instead they focus on the anxiety around jobs, income and supporting their families.

“It’s hard when the only thing that has been on your mind is survival,” he said.

To help them navigate the health system further, Waktola keeps a register of local specialists, like cardiologists and pediatricians, who offer low-cost care on a regular basis. He also calls multiple pharmacies when he is prescribing a medicine to find out which one offers the generic version with the cheapest price tag.

For Jaya Laxchi, a stable life is the only thing her family really needs — the only thing that promises good health and calm after years of movement and transition. She said her son, who takes the bus to his factory job each day, struggles to support her family while her daughter-in-law takes English classes, and her two teenage grandchildren adjust to their public schools.

Stirring white sugar into a glass of milky coffee, the quiet matriarch mulled over the family’s long journey from their village in Bhutan to their Riverdale apartment.

“Our lives have changed a lot and we are grateful,” she said. “But in a way we were forced to choose this life and say we are happy.”

As Refugees Settle In, Health Care Becomes A Hurdle