Rigorous cleaning practices don’t ensure that medical scopes are free of contamination, and many of these reusable devices have scratches and dents that could harbor blood, tissue and bacteria, a new study found.

The seven-month study, published Tuesday in the American Journal of Infection Control, found that 12 of 20 gastroscopes and colonoscopes examined tested positive for bacterial growth, even after being disinfected using the current guidelines or additional measures.

In addition, 17 of the scopes were pulled from use at the end of the study and returned to the manufacturer for repair due to serious defects. Photos in the study show numerous scratches and dents on the ends of the scopes that could trap organic material as well as brown stains, debris and residual fluid stuck inside scope channels.

The scopes were relatively new at the beginning of the study and all were manufactured by Tokyo-based Olympus Corp., the leading maker of gastrointestinal scopes used in the United States and worldwide.

“Physicians, other caregivers, hospitals and regulators should be paying keen attention to this issue, as patients have a right to assume that clean instruments are being used on them,” said Cori Ofstead, the study’s lead author and an epidemiologist in St. Paul, Minn.

Since 2015, federal prosecutors, lawmakers and government regulators have been investigating a series of outbreaks of antibiotic-resistant “superbugs” across the country tied to scopes. Most of the scrutiny has been focused on a specific device known as a duodenoscope, which is used to inspect and treat problems in the gastrointestinal tract. It has been tied to at least 35 deaths in the past four years.

But this study and other outbreak reports suggest a broader problem affecting other types of scopes, which could put more patients at risk of dangerous infections nationwide. However, the bacteria this latest study found weren’t the drug-resistant superbugs that can be deadly for patients.

The research was limited to a small number of scopes at one surgery center affiliated with the University of Minnesota Health System. But outside experts said the research was rigorous and raised serious concerns.

“It was quite shocking to see the pictures in this study,” said Michelle Alfa, a professor in the department of medical microbiology at the University of Manitoba and an adviser to U.S. regulators on scope testing. 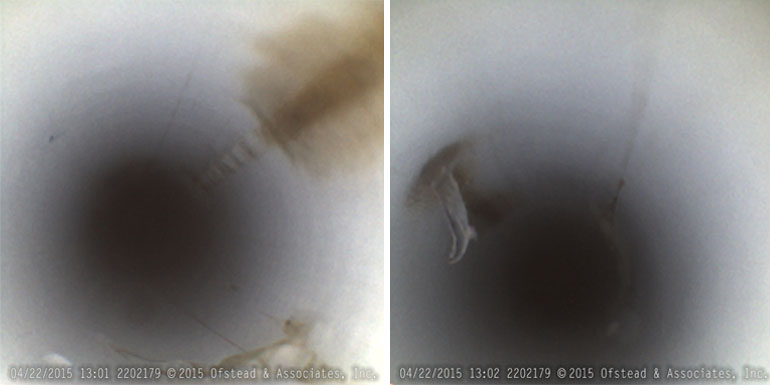 “Those scopes shouldn’t be in use. I’m amazed the gastroenterologist could even see anything because the lens was covered in so much crud. The insides look pretty gruesome, too,” Alfa said.

Alfa said the staining and discoloration inside the scopes indicated a buildup of biofilm, a slimy material that shields bacteria and other microbes from being removed during cleaning. “It’s like your roast pan that gradually gets brown crud baked on it and you can’t pick it off,” she said.

The U.S. Food and Drug Administration, which regulates medical devices, said it’s aware of the study’s findings and urges hospitals to immediately remove from service any scopes that show signs of damage.

“The FDA continues to actively monitor challenges associated with reprocessing reusable medical devices and to look for ways to reduce the risk of infection with reprocessed endoscopes,” said agency spokeswoman Deborah Kotz.

Since the recent outbreaks and subsequent government warnings, many hospitals have adopted a variety of new safety measures to combat scope-related infections.

This study focused on widely used colonoscopes and gastroscopes, which have somewhat simpler designs than duodenoscopes and are believed to be easier to disinfect. The study didn’t track patients and there was no evidence of infection among people treated at the study site.

The colonoscopes, which peer at the inner lining of the large intestine, presented fewer problems than gastroscopes, designed to examine the upper gastrointestinal tract. When the clinic’s technicians performed tests to detect contamination, they found the first manual cleaning worked 99 percent of the time for colonoscopes. (Subsequent testing showed further contamination.)

For gastroscopes, only 48 percent were deemed clean after the first try. And 11 percent never reached the benchmark for clean even after two rounds of manual scrubbing and two rounds of automated cleaning and high-level disinfection.

The researchers said gastroscopes may be incurring more damage and becoming more resistant to cleaning due to exposure to stomach acid and bile in the upper gastrointestinal tract. They said more research is needed to determine the reasons and to identify more effective cleaning methods.

Olympus, the device manufacturer, issued repair reports on 14 of the scopes and it said 13 of them had at least one critical defect, according to researchers.

In a statement, the company said it “welcomes additional research and perspectives as helpful to the entire medical community and our own efforts to increase patient safety related to endoscopes.”

In October 2015, the FDA ordered Olympus and two other scope manufacturers, Pentax and Fujifilm, to study the effectiveness of their cleaning protocols for duodenoscopes at clinical sites in the field.

Ofstead said medical providers are still waiting for that critical information while problems in the field persist. “They haven’t yet published any real-world results showing their protocols work even though the FDA told them to do these studies,” Ofstead said.

Those studies appear to be in the early stages, according to data on the FDA website. Olympus said it’s planning for its duodenoscopes to be tested for bacterial growth after reprocessing at four different sites.

Linda Greene, a registered nurse and president of the Association for Professionals in Infection Control and Epidemiology, agreed manufacturers need to address the safety issues posed by scope defects.

“The concerns about damage in frequently used scopes begs questions about design issues,” said Greene, the manager of the infection prevention program at the University of Rochester’s Highland Hospital in New York.

Renewed Cleaning Efforts For Scopes Not Enough To Vanquish Bacteria