Another health care legend is retiring on Capitol Hill. 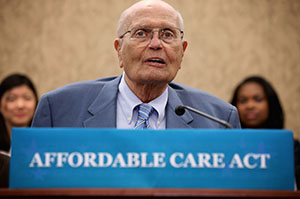 Rep. John Dingell (D-MI) speaks during an event marking the third anniversary of the passage of the Affordable Care Act at the U.S. Capitol March 20, 2013 in Washington (Photo by Chip Somodevilla/Getty Images).

Rep. John D. Dingell, a Michigan Democrat who was a key player in many health care battles in Congress, including enactment of the 2010 health care law and his push for a “Patient’s Bill of Rights” in the late 1990s and early 2000s, said Monday he will retire at the end of his current term.

“I’m not going to be carried out feet first,” Dingell told the Detroit News in a story published Monday morning. “I don’t want people to say I stayed too long.”

The 87-year-old, who has served in the House for nearly 60 years, is known in the health care world for championing a variety of issues, including Medicare (he presided over the House when it passed the bill), children’s health care and the quality and safety of the nation’s drug supply.

Every year since he joined Congress in 1955, Dingell has sponsored universal health insurance legislation first introduced by his late father, John Dingell Sr., whom he succeeded in the House. A former chairman of the Energy and Commerce Committee, Dingell also worked with the late Rep. Charlie Norwood, R-Ga., and former Rep. Greg Ganske, R-Iowa, to find a compromise to move a Patients’ Bill of Rights. Many of the elements of that bill eventually were incorporated into the health care law.

President Barack Obama praised Dingell’s long service in a statement Monday. “But of all John’s accomplishments, perhaps the most remarkable has been his tireless fight to guarantee quality, affordable health care for every American,” the president said. “Decades after his father first introduced a bill for comprehensive health reform, John continued to introduce health care legislation at the beginning of every session.  And as an original author of the Affordable Care Act, he helped give millions of families the peace of mind of knowing they won’t lose everything if they get sick.”

In his interview with the Detroit News, Dingell said the current environment on Capitol Hill, more than any concerns about his age or health, persuaded him to retire.

“I find serving in the House to be obnoxious,” he told the paper. “It’s become very hard because of the acrimony and bitterness, both in Congress and in the streets.”

As the news of Dingell’s announcement swept through the Capitol, lawmakers in both parties were quick to praise the lawmaker who has been dubbed the Dean of the House.

Rep. Henry Waxman, a California Democrat who recently announced he also plans to retire at the end of this year, said Dingell’s “legislative and oversight record is extraordinary.  He has been an exceptional leader on health care and energy policy and has made America a healthier and more prosperous nation.  He has been a role model for me and generations of members, for which I will always be grateful.” In 2008, Waxman beat out Dingell in a bid to chair the Energy and Commerce panel.

Current Energy and Commerce Committee Chairman Fred Upton, R-Mich., said that he enjoyed working with Dingell on a number of issues “from spearheading the recovery of the auto industry, to ensuring our drug safety laws are complete, to updating our pipeline safety standards.” In his statement, he added, “The term ‘legendary’ will always be associated with the name ‘John Dingell.’”