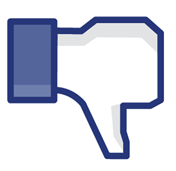 Americans’ dislike for health insurers is a trending topic.

Seventy percent of social media comments about major health insurers were negative during the past year, according to a new report released by Amplicate, a social media analytics service.  The company analyzed public tweets, Facebook posts and comments on its own website between September 2010 and August 2011. Social media users made 2,311 comments total about 18 insurers, and those opinions were shared more than 632,000 times. Insurers aren’t alone, and they aren’t the most talked about:  In the past year, U.S airlines generated over 34,000 comments and U.S. banks had nearly 22,000 comments.

Negative opinions outnumbered positive ones every month of the year, except one: May 2011, which also had the most comments total, had a slight majority (51 percent) of positive opinions. That uptick, Amplicate noted in its report, corresponded with the firestorm of reaction to Rep. Paul Ryan’s budget plan, announced in April, which included controversial changes to Medicare. The government insurance plan accounted for 66 percent of comments in May, and while most were positive about Medicare, the negative comments were shared more times on social media.

According to Lisa Gualtieri, an assistant professor at Tufts School of Medicine who studies social media, the negative comments are due “in part because people don’t always feel empowered by their insurers and by these government changes that might affect their insurance.” People often turn to social media to air out complaints, and news events like the Ryan plan or rate hikes can serve as a trigger for it, Gualtieri added.

Over the entire year, Medicare was the most-liked insurer among those analyzed: 43 percent of its comments were positive. For updated data on U.S. health insurers, see Amplicate’s topic page.

Report: Americans Give Online Thumbs Down To #healthinsurers