The report, attributed to an unnamed person familiar with the U.S. Attorney’s Office of the Southern District of New York, revived questions about the propriety of Price’s investments in numerous health care companies that stood to benefit from legislation he voted for and sponsored as a Georgia congressman. Those concerns have dogged the former congressman since Trump nominated him to head HHS last November. 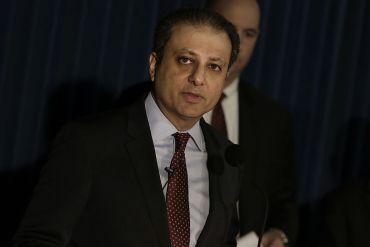 Preet Bharara was asked to step down as U.S. attorney for the Southern District of New York by the Trump administration. (Peter Foley/Bloomberg via Getty Images)

It also brought fresh dramatic flair to the little that is known about how one of the nation’s most prominent U.S. attorneys lost his job. Bharara, whose jurisdiction included Wall Street, gained fame prosecuting financial corruption cases over eight years on the job.

When the Trump administration asked 46 U.S. attorneys, including Bharara, to step down, he refused the request.  Afterward, Bharara tweeted that he had been fired.

The U.S. attorney’s office declined to comment on ProPublica’s report.

Price, previously a member of the House Ways and Means Committee, came under fire during his confirmation hearings for his health industry stock trades and promised to divest himself of holdings within 90 days of taking office. An HHS spokesman said Friday that Price met that requirement but declined to release details.

Among Price’s stock purchases that garnered the most scrutiny: his investment in Innate Immunotherapeutics.

Innate has deep connections to Trump confidant Rep. Chris Collins, a Republican from upstate New York who sits on the health subcommittee of the House Energy and Commerce Committee. Collins owns 17 percent of the company’s shares, making him its largest shareholder. One of the company’s pending FDA applications is happening right outside Collins’ district, KHN revealed last month.

Four other Republican congressmen invested too, even as scrutiny surrounding the company increased. A report from ethics watchdog CREW (Citizens for Responsibility and Ethics in Washington) Friday found that Reps. Mike Conaway (R-Texas), Doug Lamborn (R-Colo.), Billy Long (R-Mo.) and Markwayne Mullin (R-Okla.) all bought shares of Innate in January 2017. Mullin and Long both sit on the health subcommittee with Collins.

“Congressman Long did not learn of Innate Immunotherapeutics through a colleague, but rather through the news in January when the company became a daily topic in the news,” Long’s press secretary, Hannah Smith, said in an email.

Democrats in January called for an investigation into the extent of Price’s holdings and asked the Securities and Exchange Commission to determine whether he used insider information. Earlier that month Public Citizen, a nonprofit watchdog group, submitted a letter of inquiry to the Office of Congressional Ethics requesting closer scrutiny of investments by Price and Collins in the foreign company.

The offices of Mullin, Conaway and Lamborn did not immediately return requests for comment.

Update: This story was updated on March 18 to reflect Rep. Chris Collins’ connection to Innate Immunotherapeutics.