While average compensation for top health insurance executives hit $5.4 million each last year, a little-noticed provision in the federal health law sharply reduced insurers’ ability to shield much of that pay from corporate taxes, says a report out today. 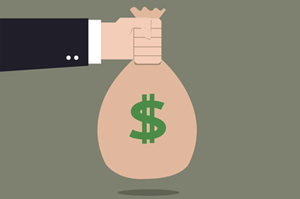 As a result, insurers owed at least $72 million more to the U.S. Treasury last year, said the Institute for Policy Studies, a liberal think tank in Washington D.C.

Researchers analyzed the compensation of 57 executives at the 10 largest publicly traded health plans, finding they earned a combined $300 million in 2013. Insurers were able to deduct 27 percent of that from their taxes as a business expense, estimates the report. Before the health law, 96 percent would have been deductible.

UnitedHealth Group, which paid CEO and President Stephen Hemsley about $28 million in pay and stock options in 2013, had the biggest tax bill among the 10 companies, the report found. Hemsley’s compensation accounted for nearly $6 million of the firm’s estimated $19 million in taxes that the report says it owed on  pay packages for five executives under the health law.

The insurers’ lobby opposed the provision, saying deductibility rules should be consistent across all industries.

“Requiring plans to pay higher taxes does nothing to make coverage more affordable or accessible,” said Brendan Buck, spokesman for the trade group, America’s Health Insurance Plans, which had not seen the report.

Under the 2010 law, insurers can deduct only the first $500,000 of annual compensation per employee from corporate taxes, down from $1 million allowed before the law’s passage.  The law also requires insurers to include so-called “performance pay,” such as stock options, which often represent a hefty portion of an executive’s pay.

The provision is similar to limits Congress imposed on executives at the banks that took Troubled Asset Relief Program funds.  Most other industries can still deduct the first $1 million in compensation — and can exclude performance pay from their income tallies.

Using compensation figures from filings with the U.S. Securities and Exchange Commission, the institute estimated the amount of compensation that is no longer deductible. They calculated taxes owed on that amount using a model that assumed a 35 percent corporate tax rate. The report found:

— On average, the insurers owed $1.3 million more in taxes per executive.

— So-called “performance pay,” which is no longer deductible for health insurers, accounted for more than $204 million of the compensation awarded.

The provision on executive pay was added to the health law by former Democrat Sen. Blanche Lincoln of Arkansas, who called it “a fair policy aimed at encouraging health insurance companies to put premium dollars toward lower rates and more affordable coverage, not in the pocketbooks of their executives” in a December 2009 press conference.

Lincoln was defeated in the November 2010 election by Republican John Boozman and now runs a lobbying firm.

Another health law provision also limits how much of consumers’ premiums can go towards administrative costs, which include executive compensation, by requiring plans to spend at least 80 percent of premiums on medical care.