Latinos make up a disproportionate share of the nation’s uninsured and most could get coverage from the Affordable Care Act or existing programs if every state expanded Medicaid,  according to a federal report released Tuesday. 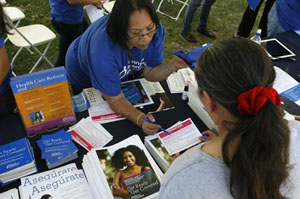 The report said that if all states expanded Medicaid, as many as 95 percent of eligible, uninsured Latinos might qualify for Medicaid, the Children’s Health Insurance Program (CHIP) or subsidized coverage through the health law’s new online marketplaces available to individuals with incomes between 100 percent of the federal poverty level ($11,600) and four times that amount ($46,000). Half the states have not expanded Medicaid, including the Latino-heavy states of Florida and Texas.

The eligible uninsured are those living in the U.S. legally.

The report is part of the Obama administration’s  effort to recruit people to sign up for new coverage options available under the law.  Officials said they did not have figures for how many eligible Latinos have signed up in the 36 states covered by the federal marketplace.

California, which is running its own marketplace and has expanded Medicaid, has said enrollment among Latinos has been slow since the sign-up period began Oct. 1. An estimated 1.2 million, or 46 percent, of the 2.6 million Californians eligible for federal premium subsidies are Latino. But Covered California last month said only 20 percent of enrollees through the end of December described themselves as Latino on their applications.

According to the federal report, about 1 in 4 uninsured individuals who are eligible for the marketplace nationwide are Latino (10.2 million out of 41.3 million individuals). Most live in California, Texas and Florida and about half are between the ages of 18 and 35.

The report details uninsurance rates by state and provides several examples of what premiums might look like for Latinos living in major metropolitan areas.

“The health care law addresses longstanding inequalities that have affected minority communities across the nation, including lack of access to affordable health insurance coverage,” Health and Human Services Secretary Kathleen Sebelius said in a statement.

In addition to going to www.healthcare.gov, Latinos can enroll using the Spanish language through CuidadodeSalud.gov.

Report: Latinos Could Be Big Winners From Obamacare