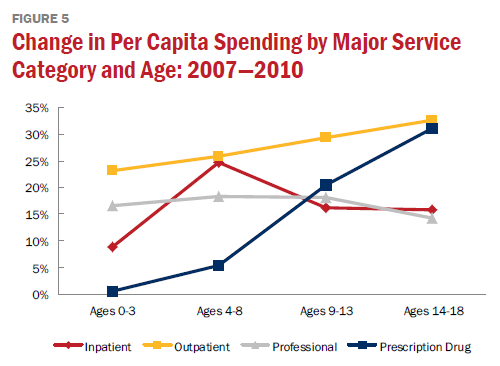 Health care spending is growing significantly faster for children than for adults, and a new report finds that that’s largely because of price increases.

The findings come from a report by the Health Care Cost Institute, a nonprofit group with access to claims data from three of the nation’s largest insurers – Aetna, Humana and UnitedHealthcare. The combined claims data covers about 20 percent of all people under age 65 with employer coverage. An earlier HCCI report showed similar trends for patients of all ages.

The majority of U.S. children, estimated at 41.4 million in 2010, are covered through employer-sponsored insurance.

Authors of the latest report note several areas for concern in addition to price increases. Children’s use of mental health and substance abuse services jumped nearly 24 percent. Prescriptions for antidepressants and similar psychiatric drugs rose more than 10 percent, and in 2010, children age 14 to 18 each had at least one prescription, on average.

“Children tend to use less expensive health care, so a bump in children’s health care spending is troubling because it could indicate that kids are getting sicker or receiving unnecessary tests or excess procedures,” HCCI Governing Board Chairman Martin Gaynor said in a prepared statement. “The data on spending for mental health and substance abuse services is particularly worrying.”

— Overall prescription drug use by children dropped slightly between 2007 and 2010, but use of cardiovascular drugs and hormones both increased more than 20 percent.

— Per capita spending on children was lowest in the West and highest in the Northeast in 2010. There was a $311 annual difference between the two regions.

Report: Spending On Children’s Care Rose Because Of Higher Prices