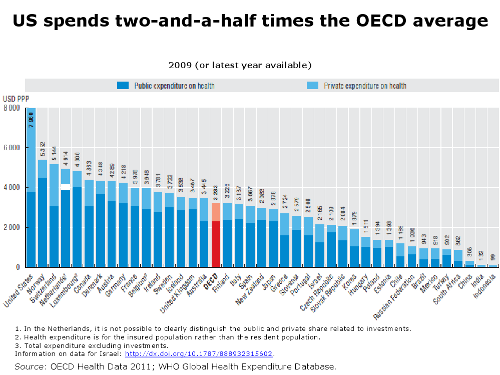 The United States far outpaces other countries in how much it spends on health care, although Americans have a lower rate of doctor visits and hospitalizations than most of the other 34 member countries of the Organization for Economic Co-operation and Development.

In its Health at a Glance 2011 report, out today, the OECD shows that the United States spent about $7,960 per person on health care in 2009 – about 2.5 times the average of the countries studied.  It also found that health spending in the U.S. has increased faster than in all other high-income OECD countries since 1970, even accounting for population growth.

Why? Generally, prices for medical care are higher in the U.S. – and some services are performed more often. Hospital prices are 60 percent higher than the average of 12 selected OECD countries, and the U.S. also generally pays more for each appendectomy, birth, joint replacement or cardiac procedure.  Americans have more imaging tests, such as CT scans and MRIs, than residents of other countries and are far more likely to have knee replacements, coronary angioplasty or surgery to remove their tonsils.

Even with all that, compared with most of the other developed countries, the U.S. has fewer practicing physicians per person, fewer hospital beds, and patients don’t stay as long in the hospital.

So what are Americans getting for their money? The U.S. has the best five-year survival rate for breast cancer and comes in second, behind Japan, in terms of colorectal cancer survival.  But the U.S. ranks 27th in life expectancy at birth, 31st in premature mortality, and 25th in the rate of cardiovascular mortality. The U.S. has the second worst rate of adult diabetes, behind Mexico, and has the highest rate of adult obesity, at 34 percent.