The House will vote next week on measures to delay the 2010 health law’s individual and employer mandates, House Speaker John Boehner said Thursday. 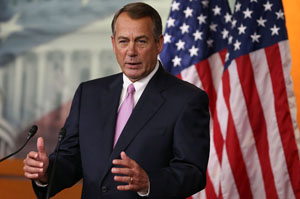 The votes would be the 38th and 39th time House Republicans have voted to repeal all or part of the law.

Congressional Republicans saw a new opportunity to kill or weaken President Obama’s signature policy achievement last week. That was when administration officials announced that the law’s requirement that employers with 50 or more workers offer insurance in 2014 or pay a fine had been postponed for one year.

Boehner and other Republicans have said it is not fair for Obama to give employers an extra year to comply but keep in place the law’s “individual mandate,” a requirement that most Americans have insurance coverage by Jan. 1 or pay a fine.

“The president has delayed Obamacare’s employer mandate but hasn’t delayed the mandate on individuals or families. I think it’s unfair and indefensible,” Boehner said at his weekly news conference.

The House Ways and Means Health Subcommittee held a hearing Wednesday on the delay and has announced a second hearing for July 17. The House Energy and Commerce Oversight and Investigations Subcommittee is also examining the issue on July 18. In the Senate, Republicans, led by Sen. John Thune, R-S.D.,  have asked Obama to permanently delay the law’s implementation.

Administration officials and proponents of the law say the delay will cause few people to go without coverage because most businesses with 50 or more workers already provide health coverage to employees.  Advocates also stress that the law’s online marketplaces, or exchanges, are still on track to start Oct. 1, and the law’s subsidies will help eligible low-to-moderate income Americans afford health care coverage in 2014.

Echoing the sentiment of many Democrats, Rep. Jim McDermott, D-Wash., the ranking member of the House Ways and Means Health Subcommittee, said Wednesday that Republicans who dislike the law see the delay as “a chance to rip Obamacare apart.”

“The irony of objecting to the delay of a program you’ve been trying to stop is, no doubt, lost on this room,” McDermott said during the hearing.  “We’re even going to get a 38th vote to dismantle it, just for good measure.”